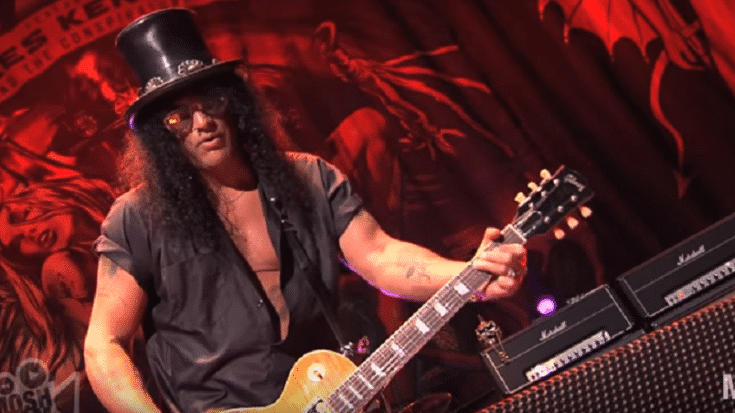 This Is So Embarrassing For All Parties Involved

There are some things you probably wish you can un-see, you know, stuff that deserves to be erased totally from your memory. If you do, then Slash can totally relate.

Being a rockstar usually means you’ve seen it all and perhaps that’s the absolute truth. But no one prepared him for what he was about to witness as an eight year old child. In an interview with Australian radio station Triple M back in 2012, he shared the following awkward and traumatizing moment:

“My mum started working with David professionally at first. I’m pretty sure that’s how it started. Then it turned into some sort of mysterious romance that went on for a while after that. She did his wardrobe for his whole Thin White Duke period and The Man Who Fell To Earth movie that he did. She did all that and he was around for a while.

He was always over -– they were always together. I caught them naked once. They had a lot of stuff going on, but my perspective was limited. Looking back on it, I know exactly what was going on. When I look back on that whole combination of people, I can only imagine how freaky it was.”

After his parents broke up, his costume designer mother Ola Hudson dated Bowie and Slash wasn’t exactly friendly or welcoming to him. A month after the interview, Slash revealed he was embarrassed about sharing that extremely awkward moment. He told 107.7 the Bone radio station,

“That was a very casual conversation with somebody on the phone in Australia that I had no idea was going to get blown up. It became this big headline and it was very awkward. I’m embarrassed because I’m sure David didn’t appreciate it… And my mum, rest in peace, probably wouldn’t have dug it either.”

He ended the controversy by saying:

“All it was: they dated for awhile, which is common knowledge. All I said was there was one occasion where I happened to walk into the bedroom when they weren’t fully dressed… That was it. It wasn’t anything more lewd than that. End of story.”

So there you have it, folks.