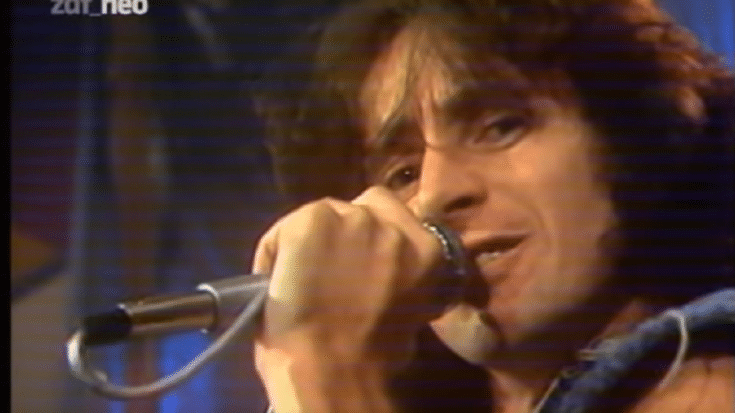 Bon Scott was with AC/DC for less than six years and yet, almost four decades after his death, people are still talking about him and referring to the Bon Scott era as one of the best. He had a penchant for hedonism and he lived life on the fast lane. He was a rockstar through and through.

Born on July 4, 1946 in Scotland, Ronald Belford Scott and his family moved to Australia in 1952. He only started using the name Bon after attending primary school because there was another Ronald in the class. As the new kid in school, he wasn’t exactly popular.

“My new schoolmates threatened to kick the sh*t out of me when they heard my Scottish accent. I had one week to learn to speak like them if I wanted to remain intact… It made me all the more determined to speak my own way. That’s how I got my name, you know. The Bonny Scot, see?”

He was around 10 when he began learning how to play the drums after joining the Fremantle Scots Pipe Band. At 15, he dropped out of school. It wasn’t long before he was sent to Fremantle Prison’s assessment center and Riverbank Juvenile Institution after several charges like stealing gasoline and escaping legal custody.

He even tried to join the Australian Army but was rejected. He then took in several day jobs like truck packer, bartender, and postman.

Inspired by Little Richard, Scott formed his first band in 1966 named The Spektors. After merging with another band, they renamed themselves as The Valentines – Scott was one of the lead singers. They were moderately successful. They recorded some songs and one even made it to the charts. In the end, they had so much creative difference they decided to break-up.

In 1970, he joined another rock band called Fraternity. They released two LPs and even toured around UK. They also performed as opening acts for bands like Status Quo and Brian Johnson’s Geordie. In 1972, Scott married Irene Thornton but filed for divorce two years later.

In 1974, Scott argued with a member of another band then he walked out and sped off on his motorbike. He got into an accident and was in coma for three days. He spent over two weeks at the hospital recovering from his injuries.

It was Vince Lovegrove, Scott’s co-singer in The Valentines, who introduced him to AC/DC. Lovegrove said:

“There was a young, dinky little glam band from Sydney that we both loved called AC/DC … Before another AC/DC visit, George Young phoned me and said the band was looking for a new singer. I immediately told him that the best guy for the job was Bon. George responded by saying Bon’s accident would not allow him to perform, and that maybe he was too old. Nevertheless I had a meeting with Malcolm and Angus, and suggested Bon as their new singer. They asked me to bring him out to the Pooraka Hotel that night, and to come backstage after the show. When he watched the band, Bon was impressed, and he immediately wanted to join them, but thought they may be a bit too inexperienced and too young. After the show, backstage, Bon expressed his doubts about them being “able to rock”. The two Young brothers told Bon he was “too old to rock”. The upshot was that they had a jam session that night in the home of Bon’s former mentor, Bruce Howe, and at the end of the session, at dawn, it was obvious that AC/DC had found a new singer. And Bon had found a new band.”

On October 24, 1974, Scott became AC/DC’s new frontman. Scott’s rebellious nature suited the band and their music perfectly. They were pure rock ‘n roll. Over the years, they became more and more successful but it was “Highway to Hell” that helped them break into the US. Unfortunately, the stress and physical demands of hitting the road and recording eventually took a toll on Scott. He drank heavily and also ended up using drugs.

According to Michael Browning who used to manage AC/DC, Scott overdosed one time back in 1975:

“Bon was bragging to me the last time he was in that hospital he was visiting two separate girls, both unknown to each other, who were both giving birth to his kids at the same time, So there’s at least two of Bon Scott’s children out there, or at least two I can vouch for.”

In 1980, they were starting to work on their next album “Back in Black”. In the early morning of February 19, after enjoying a night at a London club, Scott passed out in the back of a friend’s car. When his friend Alistair Kinnear went back to check on him, he found Scott’s lifeless body. He immediately called the cops. Scott was brought to King’s College Hospital but was dead on arrival.

There were several mysteries surrounding his death like Scott was presumably killed by exhaust fumes or that there was another person involved. None of these were proven, however.

Bon Scott was many things but he was truly passionate about his craft. He was gone too soon but with his stint in AC/DC, he made rock ‘n roll history. He will always be remembered as one of the greatest frontmen of all time.