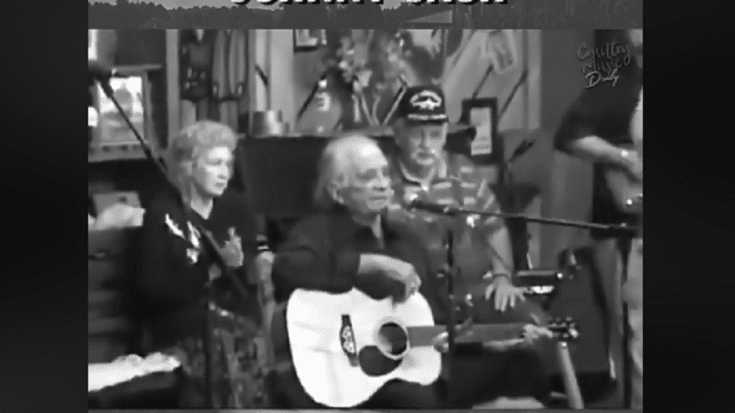 On July 5, 2003, just two months prior to his death, Johnny Cash gave his final live performance at the Carter Family Fold in Hiltons, Virginia. He was visibly weak and in a wheelchair. He had to be transferred to his chair on the center stage by two assistants. It’s not just his physical frailty that gets to us. He was also struggling with the death of his wife, June Carter, less than two months prior.

Before launching into his set, he greeted the crowd with his trademark, “Hello, I’m Johnny Cash.” Backed by bassist Bobby Starnes and guitarist Jerry Hensley, he performed an epic set list and proved that he could still put on an amazing show. For the next thirty minutes, the enthusiastic crowd understood that they were witnessing a piece of rock ‘n roll history.

After his first three songs, Cash briefly stopped and talked about his late wife.

“The spirit of June Carter overshadows me tonight. With the love she had for me and the love I have for her, we connect somewhere between here and Heaven. She came down for a short visit tonight, I guess, from Heaven, to visit with me tonight and give me courage and inspiration, like she always has.”

A few weeks later, Cash died from complications of his Diabetes. He was 71 years old.