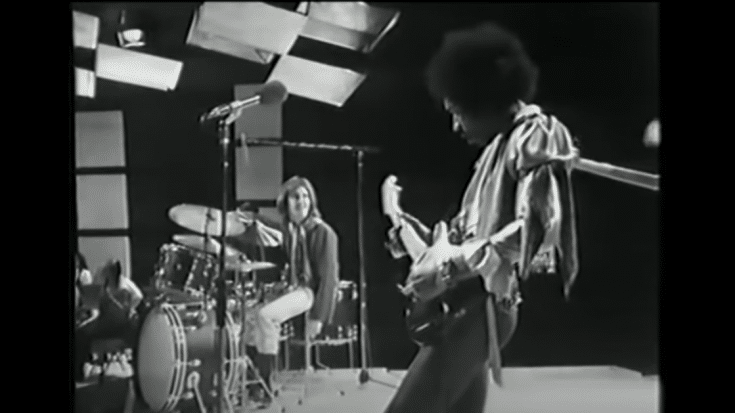 The Jimi Hendrix Experience showed up on January 4, 1969 at the BBC studios in London as they were guests for the television series Happening for Lulu. Lulu is known for her powerful vocals and while there’s no doubt she’s a stellar singer, her music and Jimi Hendrix’s were certainly on the opposite ends of the spectrum.

So imagine Hendrix’s reaction when the producers of her show approached him and said he’d sing a duet with her for her hit “To Sir, With Love”. The Jimi Hendrix Experience was slated to perform two tracks – “Voodoo Child (Slight Return)” and “Hey Joe”. Lulu would join them towards the end of “Hey Joe” and then segue into her signature song. Bassist Noel Redding admitted in Are You Experienced? The Inside Story of The Jimi Hendrix Experience that they “cringed”.

He recalled that the band was “so straight it was only natural that we would try to combat that atmosphere by having a smoke in our dressing room. In our haste, the lump of hash got away and slipped down the sink drainpipe. Panic! We just couldn’t do this show straight–Lulu didn’t approve of smoking!”

He continued, “She was then married to Maurice Gibb of the Bee Gees, whom I’d visited and shared a smoke with. I could always tell Lulu was due home when Maurice started throwing open all the windows. Anyway, I found a maintenance man and begged tools from him with the story of a lost ring. He was too helpful, offering to dismantle the drain for us. It took ages to dissuade him, but we succeeded in our task and had a great smoke.”

At first, everything went on as planned. And after they finished “Voodoo Child (Slight Return)”, Lulu commented: “That was really hot. Yeah. Well ladies and gentlemen, in case you didn’t know, Jimi and the boys won in a big American magazine called Billboard the group of the year. And they’re gonna sing for you now the song that absolutely made them in this country, and I’d love to hear them sing it: ‘Hey Joe.'”

Halfway through the song, however, Hendrix stopped playing and told the audience: “We’d like to stop playing this rubbish and dedicate a song to the Cream, regardless of what kind of group they may be in. We dedicate this to Eric Clapton, Ginger Baker and Jack Bruce.” And then they launched into their instrumental version of the Cream classic “Sunshine of Your Love” – a tribute to the supergroup that just broke up at the time.

Redding wrote, “This was fun for us, but producer Stanley Dorfman didn’t take it at all well as the minutes ticked by on his live show. Short of running onto the set to stop us or pulling the plug, there was nothing he could do. We played past the point where Lulu might have joined us, played through the time for talking at the end, played through Stanley tearing his hair, pointing to his watch and silently screaming at us. We played out the show. Afterwards, Dorfman refused to speak to us but the result is one of the most widely used bits of film we ever did. Certainly, it’s the most relaxed.”

Because of this little stunt, Jimi Hendrix got banned from BBC and a few years later, Elvis Costello recreated that historical moment during an appearance on Saturday Night Live.