The Craziest Stories About Pete Townshend 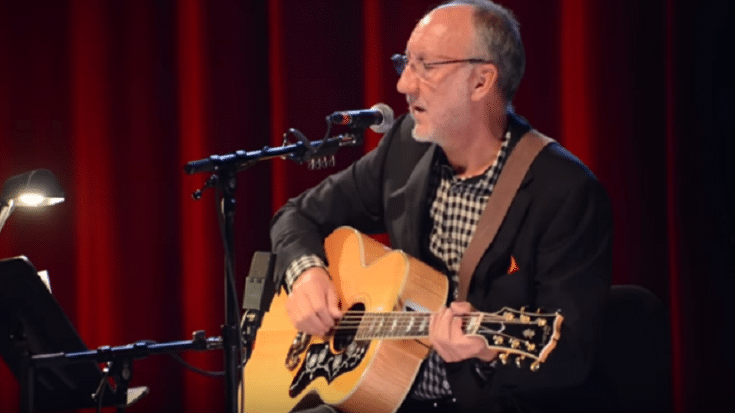 Pete Townshend deserves mad props for keeping up with Keith Moon alone. But this guitar hero also has his own share of craziness. Sure, he may not be as wild and as uninhibited as Moon the Loon, but he never shied away from speaking about his struggles, his sexuality, and some of the most insane rumors about him.

Besides, he’s not just a guitar hero. He’s also an influential figure in rock ‘n roll. And in his 500-page memoir Who I Am, he shares the most shocking tales about himself.

Everyone knows about this story that spawned numerous hit songs. As it turned out, Pete actually had a hand in it.

“Would I go with him and maybe spend some time with George so Eric could be alone with Pattie?

This turned out not to be difficult. George was happy to talk to me about Indian mysticism and music, even his use of cocaine. I found it hard to follow his reasoning that in a world of illusion, nothing mattered, not wealth or fame, drug use or heavy drinking, nothing but love for God…

[Eric] said later that it was a crucial moment in their relationship. Pattie did eventually leave George for Eric, who celebrated that success by having as much fun as he could without drugs. Pattie seemed happy and free. I hadn’t seen her smile in quite the way she did with Eric since I had first met her.”

At the Monterey Pop Festival, Hendrix followed The Who and in an attempt to upstage the band’s destruction after their set, Hendrix went ahead and set his guitar on fire.

“When Jimi set his guitar on fire, Mama Cass, who was sitting next to me, turned and said, “Hey, destroying guitars is your thing!”

I shouted back over the cheering, “It used to be. It belongs to Jimi now.” And I meant every word.”

6. His LSD trip on a plane became “the most disturbing experience I’ve ever had.”

After performing at the Monterey Pop Festival, Keith Moon wanted to drop acid. Pete and wife Karen decided to join him since they didn’t want Moon tripping alone.

“After 30 minutes, the air hostess, whose turned-up nose had made her look a little porcine, transmogrified into a real pig, scurrying up and down the aisle, snorting. The air was full of faint music… I finally traced the sound to the armrest of my seat.

After putting on a headset, I felt I could hear every outlet on the plane at the same time: rock, jazz, classical, comedy, Broadway tunes, and [Country & Western] competed for dominance over my brain.”

He also claimed he exited his body and looked down as his wife slapped his face and Moon picked his teeth.

“Keith, John, and I bought a 1936 Packard V12 hearse for £30, drove it home from Swindon, and parked it outside my flat. At some point, it disappeared. I feared it had been stolen, but when I reported this, the police told me it had been towed away. Someone important had complained about it.

Out of nowhere, I received a call from a man who wanted to buy the Packard. It emerged it had been impounded at the request of the Queen Mother. She had to pass it every day, and complained that it reminded her of her late husband’s funeral.

The bill to recover the car was over £200, an absurdly large sum of money, but the buyer offered to pay the fee in return for ownership. I agreed and resentfully dedicated “My Generation” to the Queen Mother.”

4. He heard the voice of God in the most unlikely places.

While on tour in America, Pete longed to find “the secret of all existence.” He was in his room at the Holiday Inn in Rolling Meadows, Illinois on a “vibrating bed far too big, a TV with a fuzzy screen, sheets and towels that smelled slightly of something warm, but not quite alive… I heard the voice of God.” Although he didn’t write what God said to him, he did manage to create the highly ambitious rock opera Tommy.

3. His audition for Roger Daltrey’s band Detours was a bit weird.

“We went straight up to Roger’s bedroom. The audition was very quick. [Roger asked] “Can you play E? Can you play B? Can you play ‘Man of Mystery’ by The Shadows? ‘Hava Nagila’? Okay, then. See you for practice at Harry’s.”

It wasn’t exactly because Daltrey was blown away by his axeslinging skills but because “it later turned out that one of the criminals [Daltrey] hung around was hiding from the police under the bed where I sat down to play.”

2. He kicked an off-duty police officer in the middle of their set.

Roger tried to get the microphone back, but the man pushed him away. In the middle of a heavy guitar solo, I ran over to boot his arse with a flying double-kick, but as I approached he turned to face me, and my Doc Martens connected with his balls.

He doubled up, and a couple of [Fillmore club owner] Bill Graham’s men ran on stage and walked him off. We continued to play. Only later did I discover I had kicked an off-duty officer in the Tactical Police Force, who was trying to clear the theater calmly because a fire had broken out in the store next door.”

Pete was arrested but got out on bail. There were threats about revoking his visa but the judge eventually gave him a $75 penalty. To be fair to him, Pete repeatedly apologized to the officer.

1. He wanted to get it on with Mick Jagger.

He wrote about his bisexuality and his attraction to several men and women. But one person who truly stood out for him was Rolling Stones’ Mick Jagger. He found Mick “mysteriously attractive and sexually provocative.” And Pete didn’t hold back with the details.

“Mick is the only man I’ve ever seriously wanted to f*ck. He was wearing loose pajama-style pants without underwear; as he leaned back, I couldn’t help noticing the lines of his c*ck laying against the inside of his leg, long and plump. Mick was clearly very well-endowed. It reminded me of a photograph I’d seen of Rudy Valentino similarly displaying his equipment.”