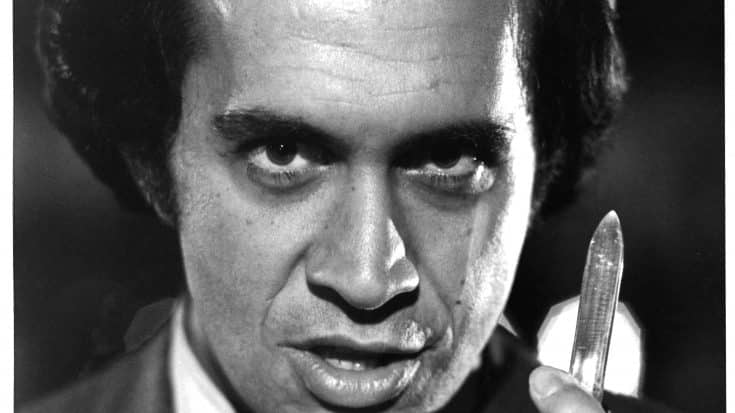 Actor Gene Simmons on set of the movie "Runaway" in 1984. (Photo by Michael Ochs Archives/Getty Images)

You Probably Don’t Know These!

Rock ‘n roll and movies go so well together – case in point, can you imagine watching Thor:Ragnarok and not hearing Led Zeppelin’s Immigrant Song OR how about Marty McFly’s Johnny B. Goode number in Back to the Future? It’s the crossover to end all crossovers.

And we compiled 10 mind-blowing facts that just might make you rewatch some of these films.

It’s just one of Frey’s several cameos in TV shows and films. In the movie, it’s up to him whether he’ll show Cuba Gooding Jr. the money.

9. This is Spinal Tap is the only movie in IMDb with up to 11 stars as its rating.

IMDb decided to add a pop culture Easter egg on This is Spinal Tap‘s page by putting 11 on the maximum star rating instead of its usual 10. You can actually rank it only up to 10. So, why did they bother? This is a play on one of the scenes which you can check above. It’s pretty clever.

8. Flea and ZZ Top had a cameo in Back to the Future III.

Back to the Future has several amazing music moments including the appearance of Flea in II and III and ZZ Top in the third movie. Flea was hard to spot in II but was fairly easy to recognize in III as Douglas J. Needles. ZZ Top, on the other hand, appeared as an Old West band performing at a festival.

7. Prince asked Stevie Nicks to write the lyrics to Purple Rain – the soundtrack of the 1984 film of the same name.

Purple Rain was supposed to be a country duet with Stevie Nicks. He sent her a 10-minute instrumental version and requested her to write lyrics. But Nicks refused. According to her, “It was so overwhelming, that 10-minute track… I listened to it and I just got scared. I called him back and sad, ‘I can’t do it. I wish I could. It’s too much for me.'”

6. Phil Collins was part of the audience in one scene on The Beatles’ 1964 film A Hard Day’s Night.

The Beatles performed at The Scala Theatre in front of over 300 screaming fans – this was to be part of their comedy movie. These “fans” were paid with a fee and among them was then-13-year-old Phil Collins. If you didn’t notice him, that’s okay, because he’s hard to spot. He told Rolling Stone, “I got the chance to be in the audience when the Beatles filmed A Hard Day’s Night. They wanted kids that were screaming, and I just sat still, which is probably why I was cut out of the film. Thirty years later I was asked to narrate a documentary about the movie.”

5. Jack Black filmed a video of him begging Led Zeppelin to let him use Immigrant Song on “School of Rock.”

How do you get rock legends to say YES when asking for permission to use one of their most popular tunes on your movie? Do it Jack Black style! You see, he and director Richard Linklater were so nervous that they ended up doing this clip of Black pleading with Led Zeppelin in a theater full of people. The song only made the scene more memorable. This is why when Thor:Ragnarok came out, Black hilariously called out Chris Hemsworth about ripping off their movie!

4. Lemmy Kilmister made an appearance on 1994 comedy movie Airheads.

We only see him for a few seconds but it’s cameo gold. Airheads already paid tribute to the Motörhead frontman with their now-famous line “Who’d win in a wrestling match, Lemmy or God? Trick question; Lemmy is God.” But that’s not enough, in a rock concert scene, Kilmister spoke up and revealed, “I was editor of the school magazine.” Yep, we can totally picture that out.

He didn’t just make a brief appearance. He’s actually the villain! He’s the mad scientist who created robot spiders. There’s not much else to say except that he nailed the part!

2. Mick Jagger wanted to film A Clockwork Orange with The Rolling Stones as his droogs.

Mick Jagger was once rumored to take on the role of Alex – the main character in the movie. He bought the rights from Anthony Burgess for $500 but sold it for a higher amount. And he also wanted his bandmates casted as the droogs. In fact, Jagger wanted to be part of the movie so badly he actually initiated a petition which was signed by Anita Pallenberg and The Beatles (whom Jagger thought could provide the soundtrack). This petition was auctioned off. In the end, Stanley Kubrick secured the rights and only wanted one man to play Alex – Malcolm McDowell.

1. Heath Ledger possibly channeled Tom Waits for his portrayal of The Joker.

In an interview before his untimely death, Heath Ledger mentioned punk rock icon Sid Vicious as one of his inspirations when he took on the role of a “psychopathic, mass-murdering, schizophrenic clown with zero empathy.” However, though Ledger didn’t mention it, a lot of people pointed similarities in Joker’s demeanor and gravelly voice to that of Tom Waits especially during his appearance on The Don Lane Show in 1979. Although we don’t know for sure if Ledger saw this clip, the resemblance is uncanny.