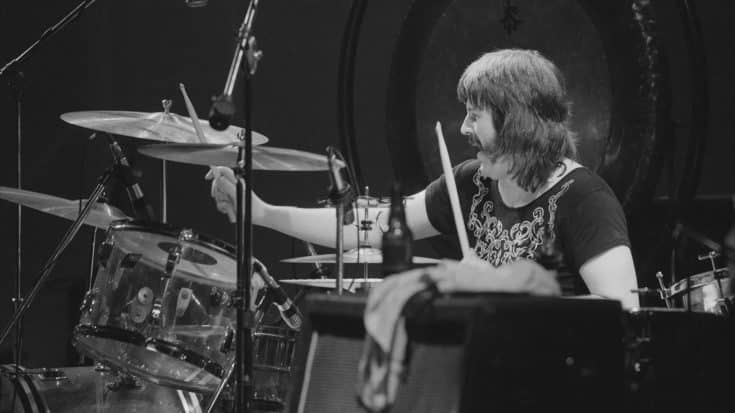 Drummer John Bonham (1948 - 1980) on stage with British heavy rock group Led Zeppelin, at Earl's Court, London, May 1975. The band were initially booked to play three nights at the venue, from 23rd to 25th May, but due to public demand, two more concerts were later added, for 17th and 18th May. Total ticket sales were 85,000. (Photo by Michael Putland/Getty Images)

The Best Seat in the House

Drum solos aren’t just for shining the spotlight on the drummer. It’s also the drummer’s way of expressing absolute mastery of his musical instrument. Besides, it’s a great way of adding more oomph to a song. And when done flawlessly, it could take the track to the next level. The best part is, solos aren’t always played the same way twice – drummers often have to improvise on stage.

So for this list, we are tipping our hats to some of the greatest drum solos of the ’70s.

Cesar Zuiderwijk’s tricky solo is far from easy. It’s just one of the highlights of the song but that sure showcased the drummer’s mind-blowing skills. Try imitating him and you’d find that he made it look effortless but the truth is far from it. It has a bit of a tribal thing going on which we can’t help but enjoy.

Bill Ward’s fiery and sizzling solo made this song more memorable. It’s fast and yet melodic. It’s exciting, exhilarating, and leaves you wanting for more. Ward owned the entire song and although this is one of Black Sabbath’s less popular tune (compared to their bigger classics), it’s widely considered as Ward’s tour de force. As he displayed some killer single-stroke rolls, it’s clear this is more like an extended solo than another Black Sabbath song.

You have to wonder how much stamina is required to pull off what Ian Paice did in this song. It’s impressive drum work and only added to the fact that he was obviously no slouch when it came to delivering the goods. He said, “It’s one of those things, as a kid, where you’re not thinking about what you can’t do, you’re thinking ‘that is what I am going to do’.”

The blistering drum solo that kicks off the song is phenomenal. The track itself is an epic masterpiece and Cozy Powell’s drumming is proof that he deserves a spot alongside other monster drummers. The power is mind-boggling and therefore it comes as no surprise that this solo alone has inspired countless others to start playing the drums.

Steve Gadd’s solo in Aja is truly iconic. For lack of a better word, it’s undeniably cool. So many videos were dedicated solely on breaking down the licks but at the end of the day, nothing will come close to how Gadd executed it. Before performing in the record, Gadd was sought-after as a session musician. Anyone who wanted memorable and sophisticated drumming lined up to hire him. It only took him two takes to finish his part in the song.

With his classical influences, Carl Palmer delivered a drum solo with both speed and finesse. It’s incredibly insane and a definite proof that his drumming is unrivaled. It’s not just the energy but the musicianship needed to flawlessly perform it live.

Nick Mason’s drumming in the solo isn’t technically difficult but it’s melodic and catchy all the same. The thing about Mason is he’s not as dramatic and flashy as other drummers and he’s far from being a show-off. Just like Ringo Starr, he plays according to what suits the song which is why he remains underrated. And his work in “Time” is definitive of how skilled he is as a drummer.

Keith Moon’s drumming was second to none. Looking closely, his solo isn’t too complicated. But only Keith Moon can keep up with other members of The Who and still manage to stand out. Even without his theatrics and crazy stage antics, his drum solo is pure magic. Anyone can learn them but it takes someone with an insane amount of talent to do it the way Moon did.

Originally recorded by drummer John Rutsey for Rush’s debut album, Neil Peart added his own magic to it after joining the band in 1974. In 1976, this was released on their live album All the World’s a Stage with Peart taking over drumming duties and it’s basically a masterclass on how it should be done. He’s a monster drummer and this is why he remains one of the greatest musicians behind the kit.

It’s one of John Bonham’s finest moments as a drummer. He can go from brutal to groovy and pretty much everything in between. From the cymbal intro to the jaw-dropping solo closing, it’s a wild ride from start to finish. It highlights the fact that no one, ABSOLUTELY NO ONE, can match Bonzo’s drumming skills.