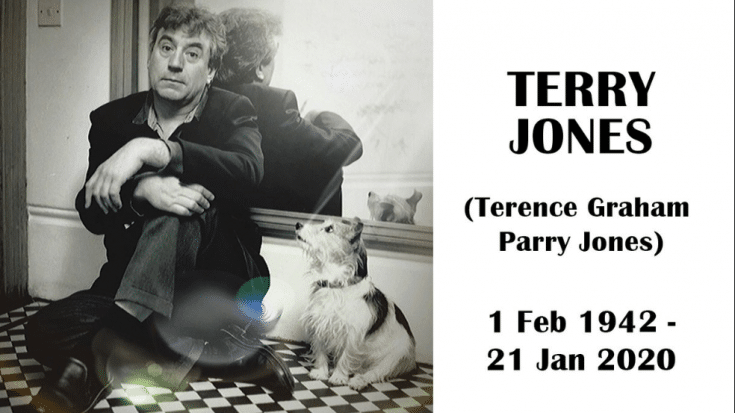 Welsh actor and writer Terry Jones died on Tuesday, January 21, at 77 years old. He was diagnosed with a rare form of dementia known as FTD back in 2016.

His family wrote in a statement: “Over the past few days, his wife, children, extended family and many close friends have been constantly with Terry as he gently slipped away at his home in North London. We have all lost a kind, funny, warm, creative and truly loving man whose uncompromising individuality, relentless intellect and extraordinary humor has given pleasure to countless millions across six decades.”

Terry Jones was born on February 1, 1942 in Colwyn Bay, Denbighshire, Wales. He’s best known for being the co-founder and star of the surreal sketch comedy series Monty Python’s Flying Circus. BBC controller of comedy commissioning Shane Allen called Jones “an absolute titan of British comedy” and “one of the founding fathers of the most influential and pioneering comedy ensembles of all time”.

Speaking about Jones, Python biographer George Perry wrote: “[you] speak to him on subjects as diverse as fossil fuels, or Rupert Bear, or mercenaries in the Middle Ages or Modern China … in a moment you will find yourself hopelessly out of your depth, floored by his knowledge.”

The Monty Python star Terry Jones has died at the age of 77. Here he is talking about 'Life Of Brian' in 1979. For more Monty Python archive clips, you can visit - https://t.co/RvURbsc5VE pic.twitter.com/97rZaXgyWF