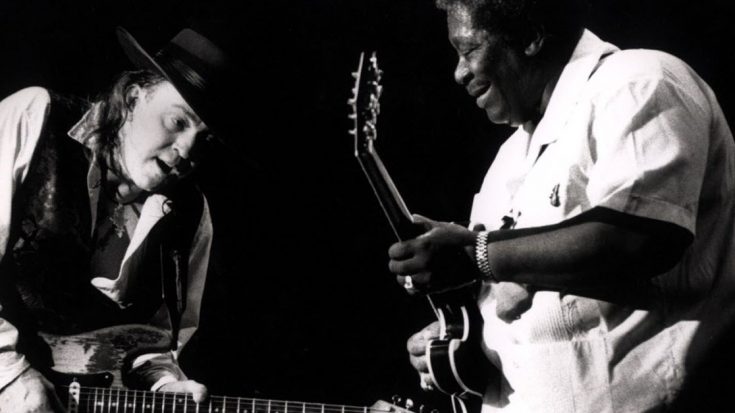 They say to never meet your heroes because you run the risk of being seriously disappointed when you realize that they’re mere mortals just like you…unless you’re Stevie Ray Vaughan, in which case rules were made to be broken and heroes were made to be met and collaborated with. Two years before his death at the age of 35, Stevie got the golden opportunity to share the stage with blues giants B.B. King and Albert Collins at the 1988 New Orleans Jazz & Heritage Festival where together, these three exemplified what it’s like to not just live your dream but to share it with the people who are directly responsible for why you even chased that dream to begin with, blending three different, distinct blues guitar styles for one delicious jam of Vaughan’s own “Texas Flood”.

With three different guitar tones coming from the guitars each man was known best for – B.B.’s Gibson, Stevie’s Stratocaster, Albert’s Telecaster – and three equally brilliant minds trading licks and slaying solo after solo, there’s no doubt in our minds that this was one of Stevie’s happiest moments and certainly a watershed moment in his already glowing career.