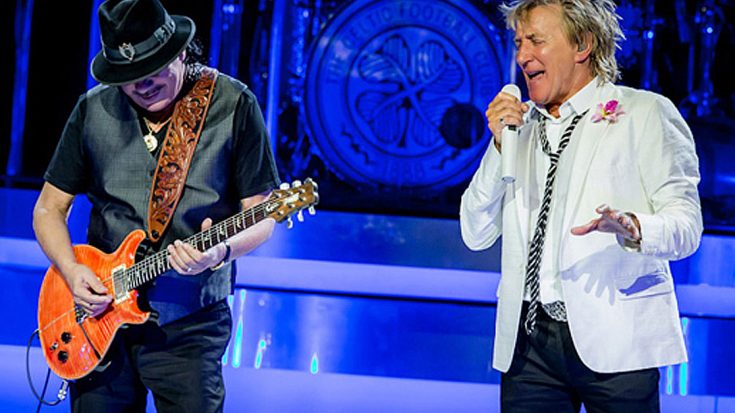 Maybe it’s the soul in Carlos Santana’s guitar playing or maybe it’s just the fact that Rod Stewart can quite literally do no wrong, but when these two legends joined forces in 2014 for a co-headlining tour across America, it was an explosive experience capped off by their first ever joint performance of Etta James’ “I’d Rather Go Blind”.

Originally recorded by Etta James in 1967, “I’d Rather Go Blind” gets a bluesy, soulful update from two of the greatest artists to ever walk the earth as Rod and Carlos engage in a perfect exchange of power onstage. Seriously – we’ve never heard anything like it!

Fun Fact: This was the first time Rod and Carlos had ever shared the stage.

Sir Rod is as smooth and suave as usual, belting out a tale of unrequited love so intense that the song’s narrator would literally rather go blind than watch their love walk away hand in hand with someone else; rocking a white suit, he’s the perfect foil to Carlos Santana who, appearing in all black and shades of gray, adds the emotional factor with improvised guitar licks meant to beautifully highlight the song’s pain. As if that weren’t impressive enough, at the end of the performance Rod reveals that they’d only rehearsed the song once.

If that’s not a match made in musical heaven, I don’t know what is!