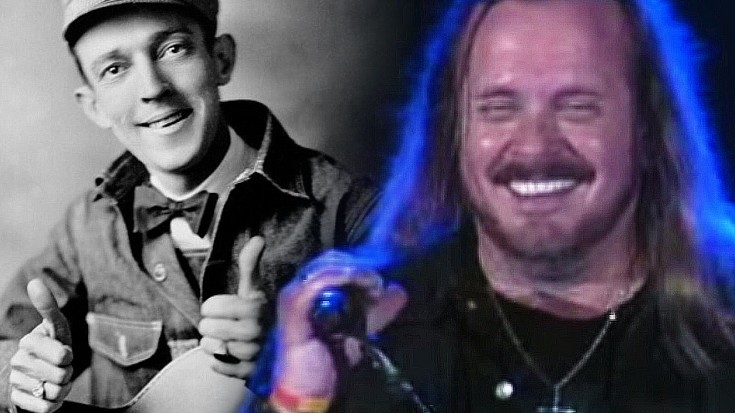 Written by country legend Jimmie Rodgers in 1927, “T For Texas (Blue Yodel No. 1)” took on a second life as a funky, good time Southern rock jam when Jacksonville natives Lynyrd Skynyrd put their unique twist on it in 1976. First featured on One More From The Road, “T For Texas” has always been a crowd favorite, and it’s easy to see why; with its patented three guitar attack launching solo after solo and a funky little piano riff that really gets the party started, Lynyrd Skynyrd seamlessly blended the worlds of country and rock to create something that perfectly sums up what we love the most about Southern rock.

In fact, the Skynyrd Nation aren’t the only ones having a good time when Gary Rossington plays that funky little intro to “T For Texas”; shot in 2011, the footage below features Lynyrd Skynyrd having an absolute ball onstage, throwing out hand gestures for “T” and trading licks back and forth with mile wide grins on their faces.

Fun Fact: The original 78 issue of “Blue Yodel No. 1 (“T” for Texas)” sold more than a half million copies.

The real treat, however comes when all three guitarists – Sparky Matejka, Rickey Medlocke and Gary Rossington – line up one by one for an awesome little guitar battle in which the fans are clearly the winners, having gotten to see three distinct styles come together for such a spirited moment onstage.

All in all, Lynyrd Skynyrd’s spirited take on this Jimmie Rodgers classic is a party from start to finish. While you’re giving us a great big ‘S’ for ‘Skynyrd,’ don’t forget to give us a ‘C’ for ‘Check out the footage below’!