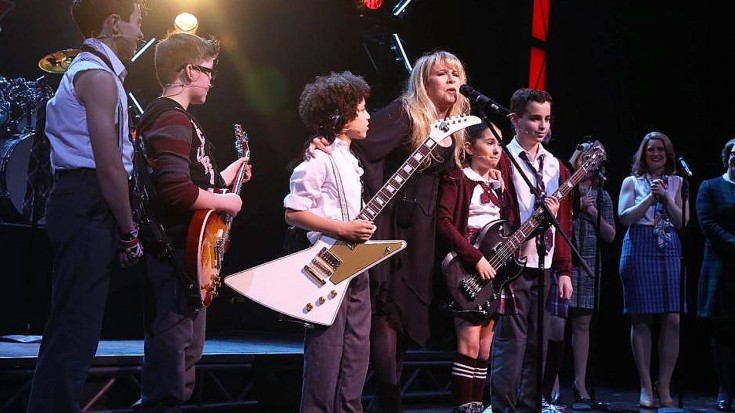 Back To School For Stevie Nicks

It’s not often that one of our favorite movies and one of our favorite musical artists meet in the middle for one big pop culture, 4th wall breaking extravaganza, but last week it actually happened. Following a showstopping performance of School Of Rock: The Musical, Fleetwood Mac’s Stevie Nicks surprised the crowd by twirling her way onstage where she joined the Broadway cast in an encore of “Rhiannon” that left the theater roaring.

For Stevie, who’s seen the 2003 film School Of Rock more than 50 times (she loves the scene where Joan Cusack and Jack Black sing “Edge Of Seventeen”!) and whose music is featured in both the film and the Broadway musical, the moment was every bit as magical as it was for the talented kids with whom she shared a stage and the audience who couldn’t believe their luck:

“To be in the presence of these kids that are so amazing that honestly sometimes I close my eyes and I’m not sure that it’s not Fleetwood Mac,” she told the adoring audience after the song.

“It’s very trippy. They are so good.”

Stevie may be a fantastic entertainer, but it’s moments like this that prove that she’s also a phenomenal human being to boot. It’s one thing to appreciate the arts, but it’s another thing entirely to support them in any way you can – even if it means clearing your night to drop in on the next generation of musicians for an impromptu crash course in how to rock!