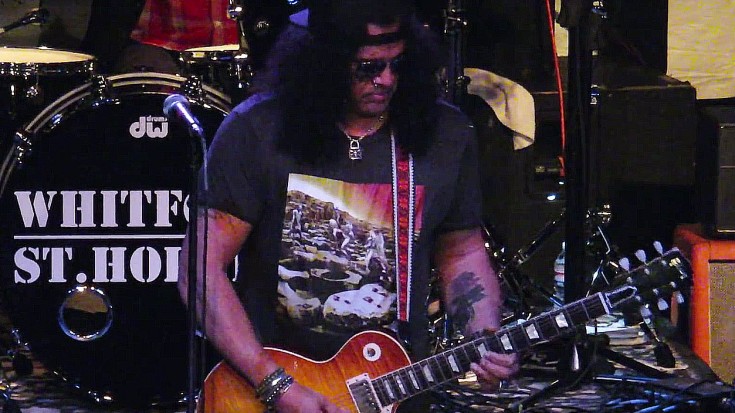 I don’t know how Slash does it! Not only is he currently rocking stages from coast to coast on Guns N’ Roses’ highly anticipated Not In This Lifetime… Tour, but the 50-year-old rocker found time to surprise fans in Nashville last night with a special appearance in the middle of Whitford/St. Holmes’ show at the Exit In, strolling onstage as the band was just beginning a cover of Ted Nugent’s “Stranglehold”.

Fun Fact: “Red House” is a slow twelve-bar blues, which music writer Keith Shadwick calls “one of the most traditional in sound and form of all his official recordings”.

Joined by Aerosmith’s Brad Whitford and Ted Nugent vocalist Derek St. Holmes, Slash launched into Jimi Hendrix’s 1966 classic “Red House,” bringing a gorgeous bluesy feel to Whitford/St. Holmes’ all-star set and turning the normally 3:50 song into an extended, winding jam spanning nearly 11 minutes in length. As with any great special guest, Slash doesn’t stick around once he’s through playing “Red House” – as silently as he snuck onstage, the Guns N’ Roses guitarist smiled, set his Les Paul down and slinked backstage, leaving both the audience and his temporary bandmates marveling at what just happened. Pure rockstar magic at its finest!