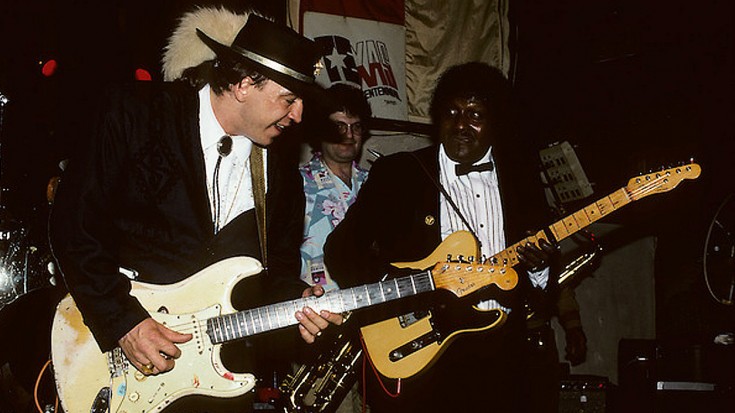 One of the greatest things about Stevie Ray Vaughan is the fact that he never tried to hide his excitement at getting to play with his idols. Whether it was as simple as jamming with big brother Jimmie, or as massive as sharing a stage with B.B. King, it was always a powerful moment in Stevie’s career when student met teacher. In 1988, Stevie got another once in a lifetime opportunity to share a stage with one of his heroes – only this time it was Texas blues legend Albert Collins, one of Stevie’s biggest influences.

The two set the venue on fire with a blistering rendition of Albert’s signature song ‘Frosty’ – Stevie absolutely owned it! Through adding his own special something that was uniquely Stevie, he made ‘Frosty’ his own, no doubt leaving Albert Collins more than just a little proud as the two traded fast and furious licks to the delight of the crowd that night.

Fun Fact: Collins is remembered for his informal and audience-engaging live performances. One anecdote stated that he left a club with the audience in tow to visit the store next door to buy a candy bar without once stopping his act!

It’s pretty safe to say that Stevie Ray Vaughan and Albert Collins were two of the greatest blues guitarists to ever emerge from the Texas blues scene. What makes their encounter onstage even more exciting is the fact that while we knew Stevie was a fan of Albert, it’s clear that Albert was a tremendous fan of him, too!

Well, I went to Detroit city
My feet got soaking wet
I was soaked, I was frostbitten
And I ain’t thawed out yet

So long, baby
Hope we’ll meet again
If you ever in trouble
Just remember I’m your friend