Story Of The Song “Bennie and the Jets” By Elton John 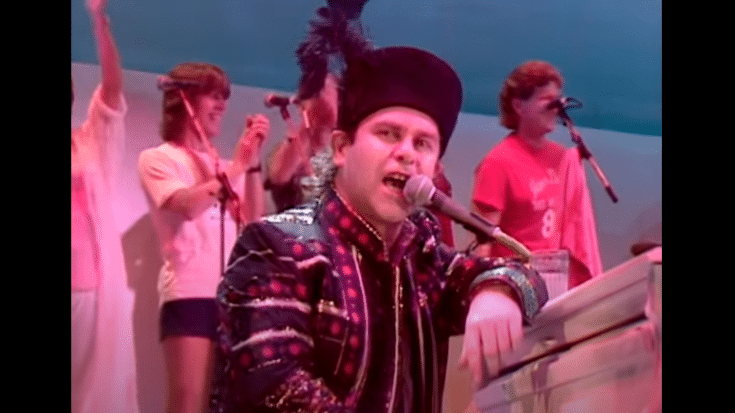 “Bennie and the Jets” was first featured on Elton John’s 1973 musical masterpiece “Goodbye Yellow Brick Road” as its closing track. He also performed it on Live Aid and went on to become one of his most popular and enduring songs. He’s played it over 2,000 times in concert.

Written by Elton John and longtime collaborator Bernie Taupin, it’s about a “weird and wonderful” fictional band, told from the perspective of a fan speaking to friends Candy and Ronnie.

It all began with Elton seeing Taupin’s lyrics while he was writing songs for GYBR. Taupin drew inspiration from comic books and movies. He wanted it to be futuristic and as what he told Esquire, “a prototypical female rock ‘n’ roll band out of science fiction.”

Elton told Rolling Stone, “I saw Bennie and the Jets as a sort of proto-sci-fi punk band fronted by an androgynous woman, who looks like something out of a Helmut Newton photograph.”

He also said, “I knew it had to be an off-the-wall type song, an R&B-ish kind of sound or a funky sound. The audience sounds were taken from a show we did at the Royal Festival Hall years earlier. The whole thing is very weird.”

Elton wrote the music and it served as his tribute to glam rock. The stuttering was also Elton’s idea and Taupin liked it because it suited the futuristic and somehow, robotic vibe of the lyrics. Taupin admitted, “That’s a little quirk of the song which I’m sad to say I had nothing to do with. That and that wonderful big chord at the beginning. I think those two things are what probably made that song so popular. Neither of which I had anything to do with.”

Producer Gus Dudgeon wanted a live feel to it so he used audience claps and whistles from an Elton John concert at London’s Royal Festival Hall and layered the effects.

Surprisingly, Elton didn’t think “Bennie and the Jets” would be a hit and he didn’t agree to releasing it as a single which is why he was shocked that it topped the charts – thanks to two Detroit radio stations (one of which was the black WJLB) that put it on heavy rotation.

Elton performed the song on Soul Station and he was the first white rock act to appear on the show on May 17, 1975 – ahead of David Bowie by around six months.

This song also inspired Guns N’ Roses frontman Axl Rose. When he inducted Elton into the Rock and Roll Hall of Fame in 1994, Rose told the crowd: “When I first heard ‘Bennie and the Jets,’ I knew I had to be a performer.”