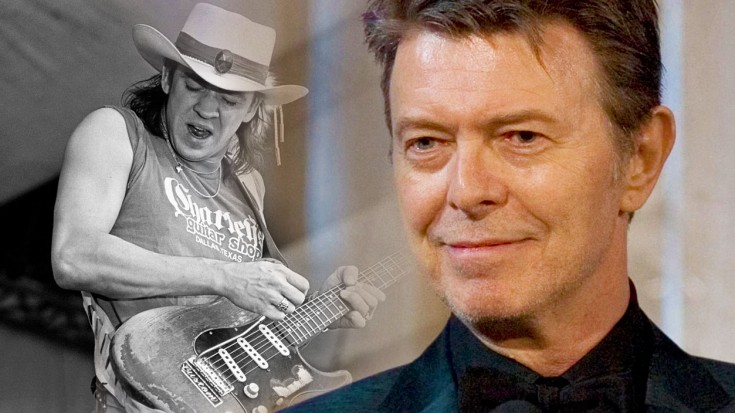 It’s no secret that David Bowie played a role in Stevie Ray Vaughan’s rise to fame; the two were introduced at the 1982 Montreux Jazz Festival and Bowie remembers being highly impressed, saying that he “hadn’t been so gung-ho about a guitar player since seeing Jeff Beck with his band the Tridents.” Stevie’s chance encounter with David Bowie resulted in a guest appearance on Bowie’s album Let’s Dance, and shortly thereafter a spot on his 1983 Serious Moonlight Tour.

While the tour eventually went on without Stevie due to contractual disagreements, this exclusive audio features Stevie playing backup on David Bowie’s iconic ‘Heroes’ – a song we’ve heard a million times over, but somehow gets a new lease on life with Stevie’s touch added to it.

Fun Fact: Stevie wasn’t familiar with David Bowie’s work until it was time to go into the studio to record for Let’s Dance.

It’s so odd hearing Stevie in the background rather than at the forefront of a song – but at the same time, it matches his incredibly humble personality, always wanting it to be more about the music than about his ego. This rehearsal footage makes us wonder what Stevie’s future would have looked like had he stayed on Bowie’s Serious Moonlight Tour instead of branching off on his own to promote Texas Flood; somehow, though, it seems fitting that at the end of the day he let the music take him where it wanted him to go.

Though nothing, will keep us together
We could steal time, just for one day
We can be heroes, forever and ever
What’d you say?

I, I wish you could swim
Like the dolphins, like dolphins can swim
Though nothing, nothing will keep us together
We can beat them, forever and ever
Oh we can be heroes, just for one day

We’re nothing, and nothing will help us
Maybe we’re lying, then you better not stay
But we could be safer, just for one day