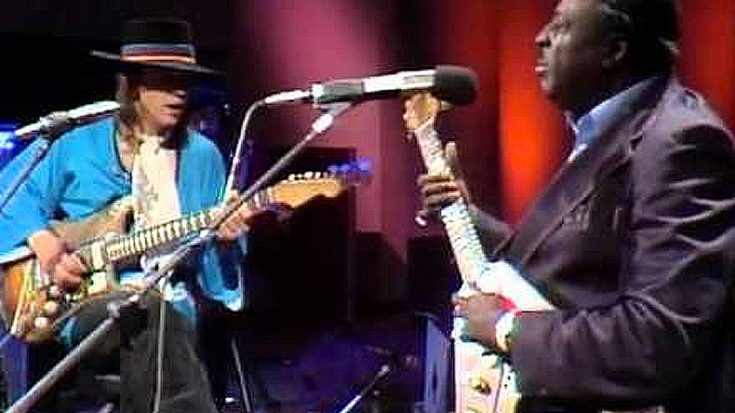 In 1983, Stevie Ray Vaughan received the opportunity of a lifetime when he got the chance to sit down with blues legend Albert King for an exclusive one-on-one jam session. Recorded live for television, In Session would later turn into a live album, and would become one of the most iconic instances of Stevie Ray Vaughan sharing a stage with one of the many blues legends that shaped his career.

Stevie and Albert ran through a few key blues standards, paying homage to some of the most iconic figures in the blues world. However, the night wouldn’t have been complete without Albert allowing Stevie to cut loose with his own “Pride And Joy,” joining him enthusiastically and giving the younger guitarist ample room to shine.

Fun Fact: Albert King nearly refused to do the show because he didn’t know who Stevie was, until he realized that Stevie was actually ‘little Stevie’, the ‘skinny kid’ that he let sit in when King played in Texas.

Watching these two icons trade licks is as good as it gets – the look on Albert’s face as he watches Stevie tear through his own “Pride And Joy” and “Texas Flood” is that of a proud parent watching their child hit a major milestone, and in this performance it became clear to everyone in the room that ‘little Stevie’ was really on his way to an incredibly bright future!