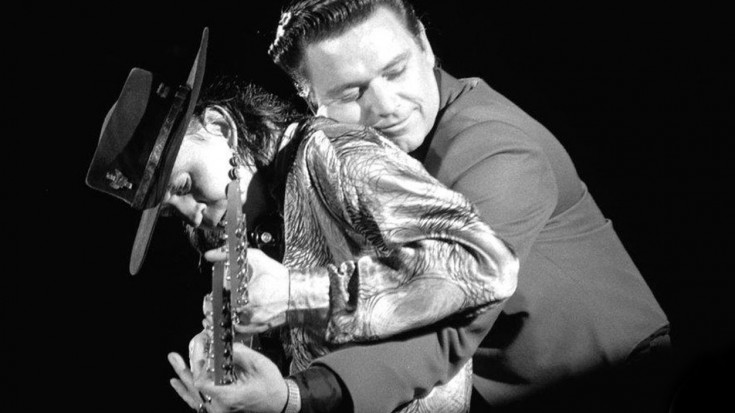 As much as we love watching footage of Stevie Ray Vaughan working his magic with his Fender Stratocaster, there was nothing cooler than watching Stevie and his big brother Jimmie go head to head in guitar battles – trading licks as easily as the two traded barbs back and forth as brothers usually do, the bond between Stevie and Jimmie was never more apparent than when they were onstage together. Always in sync with each other, Stevie and Jimmie’s favorite trick to pull out in live settings was their patented double necked guitar routine; featuring both brothers playing two halves of one song on a double necked Fender Stratocaster, this routine was nothing short of amazing especially when you consider that Jimmie, who stood behind Stevie, couldn’t see the fretboard and relied solely upon Stevie and his own skill to deliver his half of the song.

The video you’re about to see shows Stevie and Jimmie performing The Chantays’ 1963 surf rock classic “Pipeline” in early 1987 at New Orleans’ Jazz & Heritage Festival, and despite never once saying a word to each other they pull off this fantastic stunt – complete with a seamless handoff at 1:38 that still blows our minds every time. Stevie’s been gone for over 25 years and yet still keeps finding ways to surprise and delight us after all these years – be sure to check out one of the coolest moments of his career in the video below!