Stevie Nicks And Harry Styles’ “Landslide” Duet Was So Good, It Actually Brought Styles To Tears 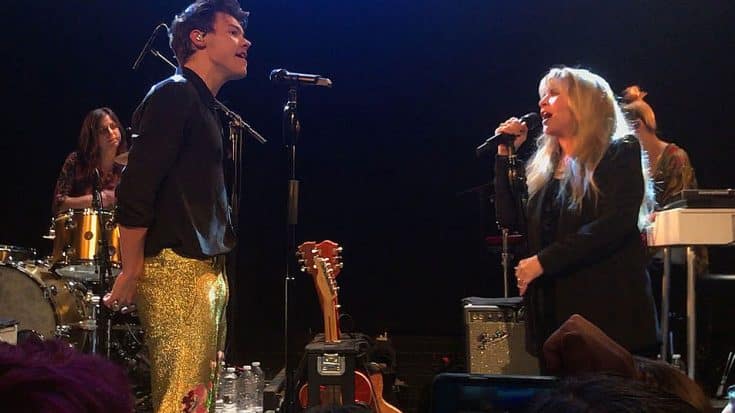 Despite joking while in character as Mick Jagger about the lunacy of leaving a successful band in pursuit of a solo career, Harry Styles seems to be doing pretty damned well for himself following his exit from One Direction. With a solo album that’s on track to become the hottest album of the year, Styles is understandably attracting the attention of all the right people; namely Fleetwood Mac singer and rock and roll fairy godmother, Stevie Nicks, who shared the stage with Styles this weekend at a secret show at L.A.’s Troubadour.

Before the crowd of 150 people who paid a mere $20 to watch the magic unfold, Nicks and Styles teamed up for an all-star duet of Nicks’ “Leather and Lace” before jumping into a cover of Fleetwood Mac’s “Landslide” that found the 23-year-old singer-songwriter thrust into the spotlight with his idol, singing the song that solidified her place in rock history as one of the genre’s most fiercely respected songwriters. It’s no surprise, then, that Styles, a lifelong fan of Stevie Nicks, was overcome with emotion during their “Landslide” duet and welled up with tears before having to take a moment to compose himself and jump right back in.

Fun Fact: Along with “Rhiannon”, “Landslide” would be Stevie Nicks’ first original contribution to Fleetwood Mac upon joining in 1974.

Whether it’s the pressure of performing with a seasoned musician of Stevie’s caliber or his own years spent on the stage that allowed Styles to recover so quickly we’ll never know, but the result makes for a performance we’d give anything to have seen live. Check it out in the video below!