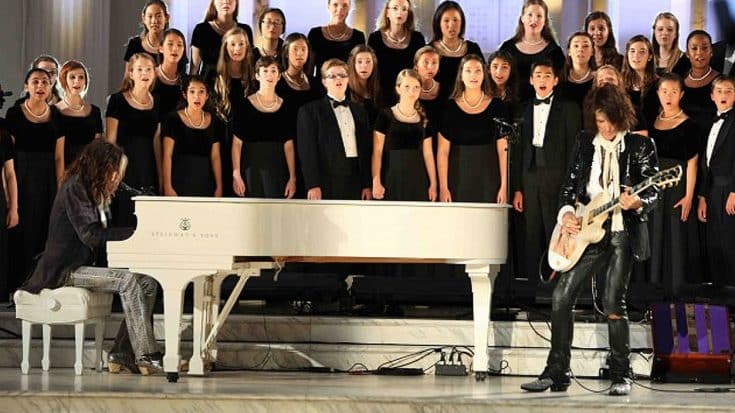 It’s ingrained in the American spirit to get up in the face of tragedy, dust ourselves off, and keep moving forward. When tragedy struck at the Boston Marathon in 2013, hometown heroes Aerosmith paid tribute to the fallen and to the resilience and strength of those they left behind to carry on with their anthem for the beaten but never broken, “Dream On”.

With the help of the talented Southern California Children’s Chorus, Aerosmith’s Steven Tyler and Joe Perry breathed new life into the 1973 anthem and crafted an incredibly intimate, incredibly powerful performance that saw moving footage of Boston Marathon runners finishing the race for their fallen and injured friends cut with dramatic, rapid fire shots of Tyler, Perry, and the Southern California Children’s Chorus providing an absolutely incredible soundtrack for the runners.

“The tragedy that took place during the Boston Marathon was unfathomable, but Boston is incredibly resilient and became even stronger.

I am so honored to release this version of ‘Dream On’ and to be able to have had the Southern California Children’s Chorus perform with us last night was a beautiful moment, a true gift from up above,” said Tyler in 2014.

An absolutely stellar performance, Aerosmith’s intimate take on “Dream On” is the embodiment of all things courageous, brave, and true; this is a tribute for the ages, and it’s one we’re sure you’ll love as much as we did.