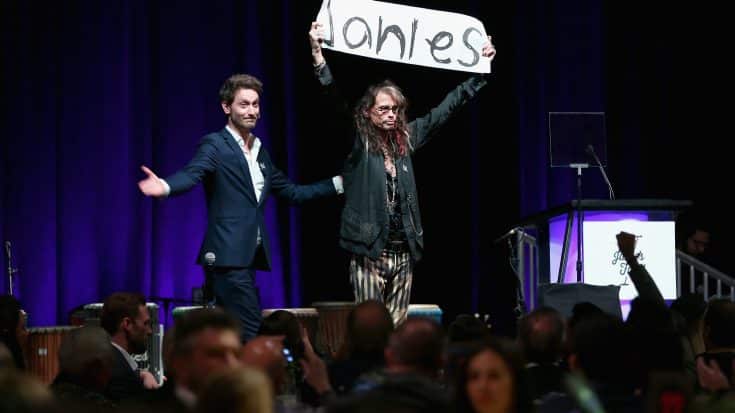 Last week, Aerosmith frontman Steven Tyler participated in a scarf-cutting ceremony for the opening of Janie’s House in Memphis, Tennessee. This recovery facility aims to help girls who have suffered from abuse or neglect. The name is inspired by Aerosmith’s 1989 hit “Janie’s Got A Gun” which was about a girl being abused by her father.

During the opening, Steven Tyler said, “This does my heart and my soul good. This is real.”

Janie’s Fund, the philanthropic initiative founded by Tyler back in 2015, donated $500,000 to Janie’s House. This is mainly for the renovation of the home operated by Youth Villages, a nonprofit organization that aims to help emotionally and behaviorally troubled children.

“As you can only imagine, being in a band with guys for 50 years, you can have problems. And rather than quit, I decided to go to this treatment center for co-dependency. While I was there, all the girls I met had been abused either physically, mentally or verbally, or at least 90 percent of them all. So when I got out of there, I laid it all on Janie. I said, what are you going to do?” – Steven Tyler

Janie’s House can cater to up to 14 girls at a time and about 30 in a year. They will receive the necessary therapy to help them recover from the trauma and eventually lead normal lives. This Memphis center is already a second location, the first one is in Atlanta, Georgia which Steven Tyler opened in 2017.

Steven Tyler was in town today for the opening of Janie’s House on the Youth Villages campus. The renovated house will be a home for dozens of girls each year who have faced neglect and abuse. pic.twitter.com/zL9wy2nApx