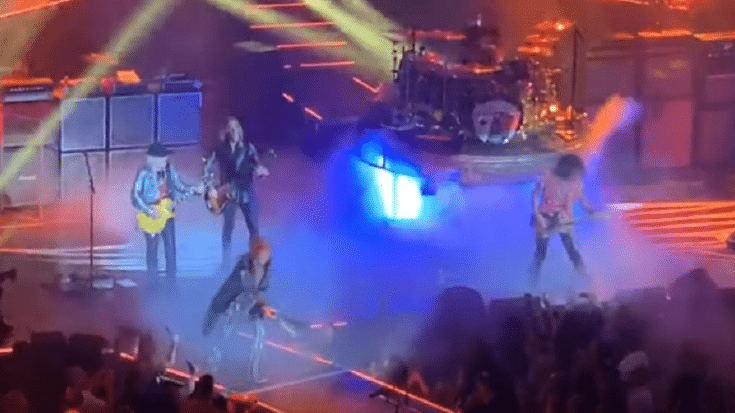 During the finale of Aerosmith’s concert at The Theater at MGM National Harbor in Oxon Hill, Maryland last August 8, frontman Steven Tyler took a tumble and fell onstage. The band was performing their 1975 classic hit “Walk this Way” when Tyler missed a step and tripped. Before a roadie hurried over to help him get up, Tyler continued singing the song while lying on his back. He finished the entire set as if nothing happened.

The show is part of their highly successful “Deuces Are Wild” tour. It’s a busy year for Aerosmith because they still have several dates left in Las Vegas and they also have gigs in New Jersey and Massachusetts. Perhaps part of their appeal comes from the fact that they know how to deliver the goods. If fans want a straightforward rock concert, that’s what they’re gonna get.

“We mix up a few things in the set on a daily basis. We always do a little bit of stuff we did in the early days and right up to today. Sometimes we change it a little bit, more for ourselves, I think, than the audience. So we always have a few surprises. Sometimes a song will be like 10 minutes before we go on, like, ‘We’re going to do this song!’ And I’m like, ‘Okay, I think I remember this.'” – Guitarist Brad Whitford

Watch the fan-filmed video below.