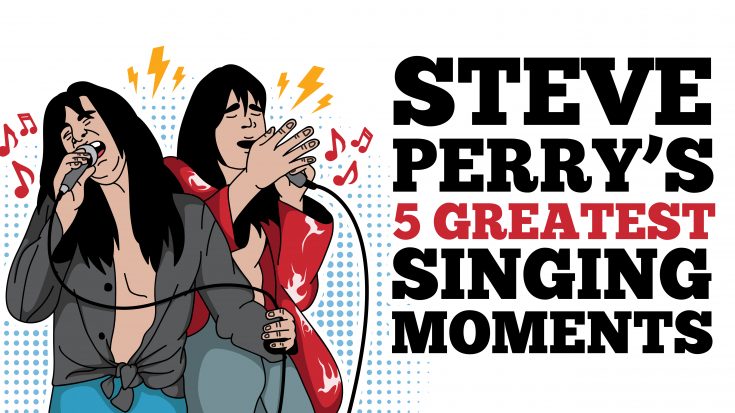 The Catalyst To Journey’s Success

If we’re going to talk about Steve Perry’s singing, we’re gonna need an entire day. The man’s a beast at vocals! But while he can hit high notes with ease, it’s not just his range. Rather, it’s how he pours his soul into each song. You talk power and tone – his is unmatched. And since we know it’s not easy to pick only FIVE of his greatest, most unforgettable moments, we took it upon ourselves to do this daunting task. Yes, now sit back, relax and listen to his spine-tingling voice:

This is the prime example that Steve Perry doesn’t belt out just for the sake of showing off. Some vocalists tend to go overboard and thus overwhelm the listener. Steve does none of that. Instead, he goes for the feeling – it’s like he’s generating some emotion for you to feel as he sings. The clarity and range of his voice are insane – but that little rasp is also something else. And his live versions just have that raw and wild vibe – like you’re getting a taste of something sinfully good. This power ballad may have been covered a hundred times but nothing can ever rival the original. AllMusic’s Mike DeGagne described it best when he said that the song “gleams with an honesty and feel only Steve Perry could muster.” Well, there’s a reason why he’s been called ‘The Voice’. His music can never be topped – yes, not even decades later.

What else can be said about this man and his god-given golden pipes? ‘Wheels In The Sky’ has his signature vocals stamped all over it. And when he hits those high notes, it’s like his voice is crawling over your skin. This is yet another proof that he is otherworldly. I don’t even know how is it possible to stay so cool while singing power ballads. And his vocals runs are so unique and rare. He sounds clear like an angel and if you’ve been to any of their concerts in the ‘80s, it’s a once-in-a-lifetime experience because dang, he just sounds way better live. It’s almost like you can breathe and touch their music. But to be fair, he can sing any song (even the directory and yellow pages) and listening to it will still give you goosebumps. The man knows no boundaries. His talent is just something else – a real musical genius.

How can Steve make singing those high notes look effortless? He’s always had that geeky charm but when he starts singing, you become aware that you’re nothing more than a mere human in the presence of a rock god. And the edgy sound in this track is the perfect way to complement Steve’s vocal performance. You see, if there’s anything we love more about Steve, it’s his ability to stretch limits. He never allows himself to be confined, musically speaking. He doesn’t mind going the extra mile – extreme range or even difficult patterns just as long as he can create an impressive and incredible sound. When you listen to his tracks, he doesn’t JUST sing a song. He sells it to you in the most beautiful way possible. And he brings the words and notes to life. Back in their prime, even with challenging touring schedules, he delivers every single night. It’s yet another reason why he’s a legend.

Listen to the first few seconds into the song and tell me if it doesn’t move you to tears. He’s not even halfway done but I’ve no doubt there’s no dry eye to be found in that stadium. How can you do this to us, Steve? You’ve stolen our hearts and crushed our souls. What more do you want?! 🙂 No, but seriously, he’s flawless and only he can manage to transition between difficult intervals without so much as a glitch. He probably eats high notes for breakfast but if anything, this track is utter perfection. From the beautiful melodic structure to the relatable lyrics and back story and of course, Steve’s soulful singing – it’s no wonder why it’s Journey’s most enduring song. Besides, it’s not every day we get to hear a voice penetrate our soul deeply. Steve had a wonderful gift which he shared to the world. And man, we are more than grateful.

This is easily one of my favorites – a brilliant masterpiece sung perfectly. Have you ever wondered that there are so many vocalists with amazing voices and yet nothing gets to you the way Steve Perry does? He’s the real deal, people. I mean, for all his years touring with Journey, he’s never had one bad performance. Just ask those who were there during his shows. He has this way of making each audience member feel like he’s singing the song specifically for them. And this song is just magical. Listening to it is like getting your heart broken into pieces only for Steve to pick up the fragments and put it all back together. And before he gives it back to you, he seals with a kiss wrapped in his raspy, golden voice. They say it’s an achievement when you can touch so many lives. Well, Steve does it with apparent ease.

Ah, yes – the soundtrack of our lives, the anthem of our generation. The arrangement is awesome, the lyrics are so inspirational, but once again, it’s Steve Perry’s voice that makes you totally ‘feel’ it. It’s so uplifting that I actually feel guilty each time I stop ‘believing.’ LOL. But dang, Steve can go high-pitched one minute, then maneuver to a gruff and raspy voice the next. And the transition is smooth and flawless! A powerful stage presence coupled with a distinctive, expressive voice and you got yourself one of the greatest, albeit a tad bit underrated, vocalist of all time. His passion for his art is almost palpable, Steve obviously never settles for anything less than 100%. And what else is there to say about this song? The musical craftsmanship is stellar and it’s timeless. It doesn’t matter if you’re a teenager, a millennial or in your sixties. If you have great taste in music, do yourself a favor and put this on repeat. It will make your day.