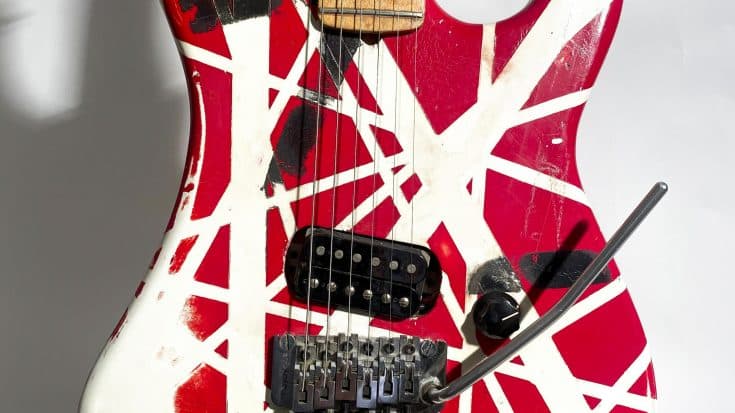 A Piece of Rock History

An electric guitar played onstage by late rock legend Eddie Van Halen is up for auction. EVH used the 1984 Kramer Stryper Guitar during Van Halen’s 1984 and 5150 world tours. It was one of five guitars hand-assembled by EVH at the Kramer factory in New Jersey. It’s hand-painted in red and has white stripes along with the remains of five black marker tape stripes on the body face.

Weighing 7.40 lbs, it has a one-piece solid poplar body contoured on the back and bass-side top edge. Others features include a single Seymour Duncan Custom humbucker in the bridge position, combined Floyd Rose bridge and locking vibrato unit, and individual Schaller M6 Mini rotomatic tuners. One unique mark on this guitar is the cigarette burn on the headstock.

This iconic guitar also comes with two letters of provenance – from James Paul DeCesare (Foreman of Assembly at Kramer 1983-1986) and Danny Perkins (President of Backstage Distributions). Bidding starts at $75,000 and the guitar’s estimated value is $150,000 – $250,000. Check out the demo below.

Meanwhile, this isn’t the only guitar from Eddie Van Halen to hit the auction block. Three of his guitars sold for $422,000 in December 2020. EVH’s son Wolfgang, however, wasn’t pleased with it and announced that he had nothing to do with it.