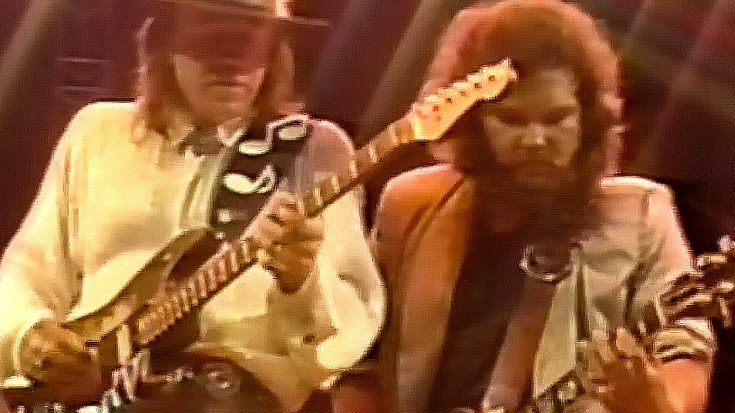 What began in 1974 as the solution to The Charlie Daniels’ Band’s problem of needing two live tracks to complete their album Fire On The Mountain eventually gave way to the star studded Volunteer Jam, a spirited celebration of some of the greatest names in music.

With a list of past guests that includes everyone Marshall Tucker Band to Dobie Gray and B.B. King, the Volunteer Jam reached a fever pitch in 1987 when Southern rock legends Lynyrd Skynyrd made one of their first live appearances in over a decade, turning their cover of J.J. Cale’s “Call Me The Breeze” into a rowdy, 10 minute all-star jam that featured the talents of late Texas blues legend Stevie Ray Vaughan.

The Jam Session You Never Knew You Needed

Dancing out from the crowd of singers and musicians, Stevie is immediately grabbed by Gary Rossington and guided to the front of the stage where with Gary faithfully supporting him with the guitar lick he knows like he knows his own name, he launches into a blues soaked barnburner of a guitar solo that sounded every bit like he’d been playing with Lynyrd Skynyrd for years – channeling both the band’s blues influences and inherent love for rock and roll for one of the coolest moments of that year’s Volunteer Jam.

All our lives we’ve wondered what a Stevie Ray Vaughan/Lynyrd Skynyrd collaboration would sound like and now that we’ve got our answer, we can’t get enough of these two musical powerhouses together on one stage!