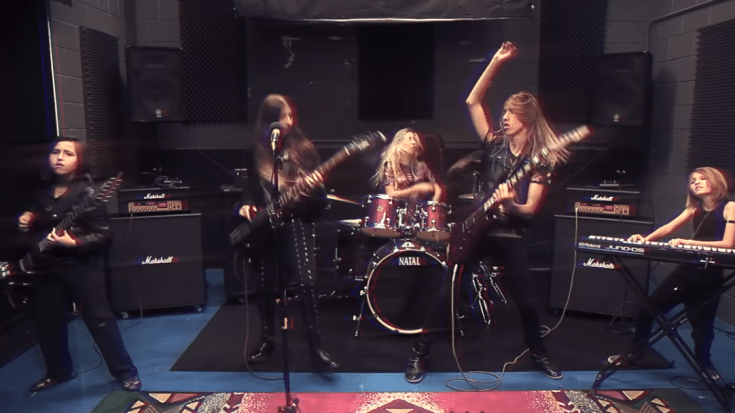 Headquartered in Los Angeles, CA -it seems as though these kids were born to be rock and roll phenomenons. Their Romanian parents describe them as a “mafia.” Family first right? Liliac performs various covers and does have a single titled “Chain of Thorns (watch here).” Recently, their cover of Black Sabbath’s “Paranoid,” has gained some heavy traffic on their YouTube channel. Liliac’s “Paranoid” performance is hard as heck. Their long hair in the air as they head-bang adds to their badass show. They thrash pretty gnar too!  Whoever is their stylist is pretty on-point with the lace, leather, velvet, and boots. But there is certainly something that sets them apart from the other kids who are ready to rock… sister Melody’s vocals. Some fans have compared her voice to Melissa Etheridge and I thought it was someone else’s voice track entirely! It definitely isn’t. When you combine the instruments and the vocals you get one impressive metal cover.

Everything They Do Is Just So Metal!

Liliac is made up of oldest brother Sam on lead guitar, older sister Aby on drums, Melody on vocals, Ethan on support guitar, and youngest brother Justin on keyboards. They are guided through their rock and roll journey by their parents and even have their own studio space to practice and record in. Liliac keeps it old school in regards to their formation and fan base. They set up organic performances in busy spots like Venice Beach and the Santa Monica Pier where many of their fans have discovered them. Their fan base is growing and the metal band has landed a gig on stage at the upcoming Anaheim, CA NAMM Show in January (2019). For anyone who doesn’t know, NAMM is kind of a big deal. That being said, it probably won’t be long before they are opening for Megadeth or  Lamb of God. Keep rocking in the free world dudes and dudettes!