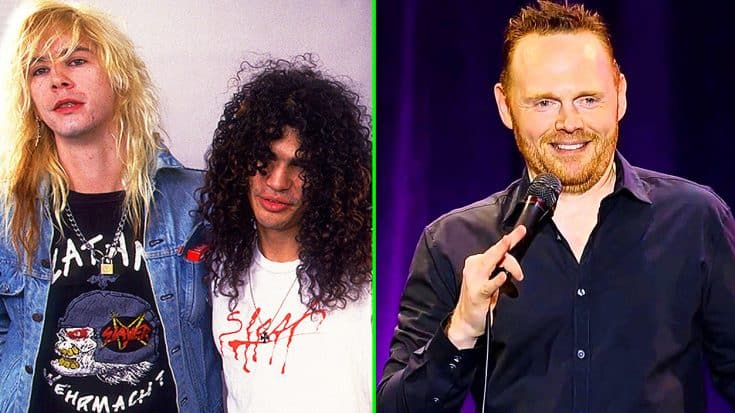 It’s always great to see people have an opportunity to do things with the people that they look up to! Everyone loves music, and to have the opportunity to perform with one’s idol, is a dream to some people, and here is an instance when that dream came true for one individual.

Comedian Bill Burr is a HUGE fan of classic rock music, and actually has taken the liberty to learn the drums. He studies the greats like John Bonham, Neil Peart, and Keith Moon. One of his favorite drummers is Guns N’ Roses Steven Adler. While performing at a charity concert, put on by Velvet Revolver guitarist Dave Kushner, Bill was called on stage to play the drums. Little to his knowledge, he was about to get the surprise of a lifetime!

As Bill was getting ready to play, Slash and Duff McKagan walked on stage to join him! Before Bill could even react, Slash played the opening chords of AC/DC’s “Highway to Hell,” and the most epic jam session follows!

“I had three seconds to process this, and then Slash just goes [imitates opening chords]. I was like, ‘Oh God, here we go.’ I couldn’t feel my legs! Somehow I was able to get through it. I screwed up like three times, but I came back on time.“- Burr said.

The video is pretty awesome, so check it out down below, and let us know what you think!