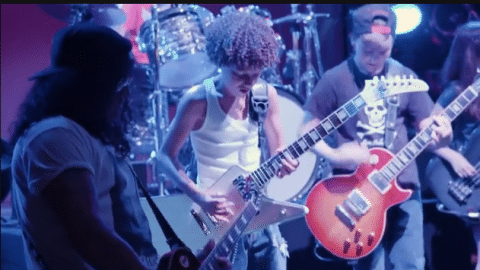 Slash makes the surprise of a lifetime for these kids!

Imagine being ten years old and being cast on Broadway’s “School of Rock” production. That’s already such a big dream come true. Then just imagine the pleasant surprise these kids had while rehearsing a Guns N’ Roses classic “Sweet Child O’ Mine” when the mighty Slash himself suddenly joins in mid-song! The delight on the kids faces will probably the sweetest thing you’ll see all day!

Slash surprised the kids from the cast of “School of Rock” on Broadway while he was in New York on tour with Guns N’ Roses. The guitar god decided to pay it forward and visit the kids during their rehearsal. You can just literally see the little boy’s jaw drop when he realized it was Slash himself playing the iconic guitar riff along with him. They went on and jammed iconic Guns N’ Roses hits together. Slash says of his meeting with the kids,

“It was really cool to meet such an enthusiastic and talented bunch of young rock ‘n’ rollers. They were great kids as well as players.”

As if the surprise in itself wasn’t enough, Slash also loaned two Gibson Custom True Historic 1959 Les Paul Reissue guitars to them.

This surprise will surely be a memorable one for these talented kids.