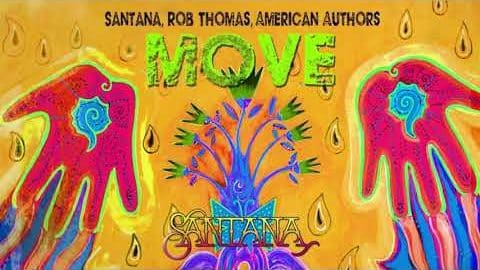 Carlos Santana and Rob Thomas have teamed up again after over two decades. Their last collaboration in 1999 was a huge success. “Smooth” was an unlikely hit for the pair. It didn’t just sell millions, it also won multiple Grammys. Thomas later co-wrote songs for the next Santana albums, but he didn’t provide vocals on any of them until now.

“[How] Move came about was very much like how Smooth happened. It was like divine intelligence behind the scenes,” Carlos Santana said. “I just knew I had to record it with Rob. The song is about awakening your molecules. Ignite and activate yourself – you know, move. When Rob and I work together, we have a sound that’s splendiferous.”

“‘Smooth 2’ is going to be said a lot,” Thomas acknowledged. “There is always this fear that people will think this was contrived, that we were sitting in a laboratory somewhere trying to recreate ‘Smooth.’ After 20 years, hopefully we’ve shown we don’t have that kind of motivation. It had to happen organically, like it did now.”

Listen to “Move” below.