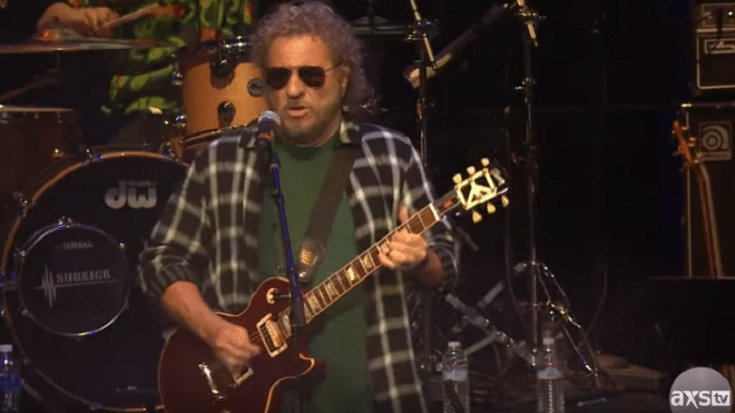 Although Sammy Hagar‘s “Your Love Is Driving Me Crazy” might not have the greatest cultural impact, this single from 1982 is still his best-charting solo effort.

Hagar’s first Top 20 hit as a solo artist was the title single from his seventh album, Three Lock Box, which peaked at No. 13 on the Billboard 100. This success was exactly what the song was meant to accomplish. Hagar mentioned this in his interview:

“I was asked by the head of promotions at Geffen Records to write a Top 40 hit like a hit song Eddie Money had out at that time (‘Think I’m in Love’). He said if I did, he would take it Top 10.

“The inspiration was the Eddie Money song. It was up-tempo very catchy pop. Also ‘Jessie’s Girl’ by Rick Springfield, which I was very aware of because of [the Hagar-written] ‘I’ve Done Everything For You’ being on that same record. The song wasn’t a hit for me, but it was a huge hit for Rick so I thought I would take another swing at it.”

Hagar recalls “Your Love Is Driving Me Crazy” was “so easy to write once I had that chorus. I really like that major seventh chord on the harmony and the music it made for a very unique catchy hook.”

In addition, Hagar’s 1982 album Standing Hampton, a platinum release that put him on rock radio with songs like “I’ll Fall in Love Again” and “There’s Only One Way to Rock,” coincided with a time when his profile was higher than ever. Hagar says he was “more interested in writing more of those kind of AOR instead of Top 40 songs and still am today,” but he was up for the challenge of ascending to the next commercial levity, saying:

“For me [‘Your Love … ‘] felt like a hit immediately and everyone at Geffen records felt the same.

“With Keith Olsen producing, who at that time produced Fleetwood Mac, Pat Benatar and Rick Springfield, who all had a boatload of Top 40 hits, we knew we had a hit.”

Hagar went into the previously uncharted territory that was a bit afield from the rock market thanks to the success of this single. Hagar explained:

“Having a song on Top 40 radio brings a whole different kind of exposure and fan base.

“My whole career, starting with Montrose, was always AOR-oriented, not Top 40. I relied on touring and classic fist-in-the-air, singalong hard rock anthems that always work in concert, which was the most important thing to me at that time. But once I had a real Top 40 hit … I saw the concert attendance increase, the record sales increase, and that felt pretty damn good. But it really didn’t change my style of writing. I still write album-oriented rock songs today.”

“‘Your Love Is Driving Me Crazy’ is still one of the favorites live for the fans. It always gets the loudest singalong of the night, and people want to get out of their seat and start dancing, which really is cool. And I love performing this song. It holds up really well today. Amazing!”