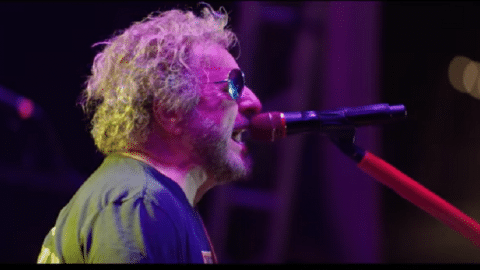 Based On Their Album

Sammy Hagar & the Circle just released a new experimental short film titled Space Between. The 37-minute movie is a companion piece to their concept album of the same name released in May this year. The story follows the main character named John in a world full of excesses. He inherited money and so he went on a downward spiral indulging in drugs, gambling and parties. After hitting rock bottom, he must make a choice whether to continue with his self-destructing ways or confront his own demons and therefore find enlightenment and truth.

Sammy Hagar & the Circle makes an appearance since music from Space Between can be heard throughout the film. Directed by ZZ Satriani, Hagar previously told Billboard in May: “I gave (Satriani) a whole bunch of money and said, ‘Go crazy!’The reason I like this movie is it gives the album more legs. It’s not just a record, and when you see this movie you’re gonna go back and listen to the record and go ‘Oh!’ It elevates your listening and viewing experience.”

He also added, “I really think it’s an important statement. I think it would be exciting to find out what happens to a guy who has it all, loses it all, blows it, then comes back enlightened and starts over by trying to build it up again. We can see what he does with his money and his energies and his abilities to do something better with a second chance.”