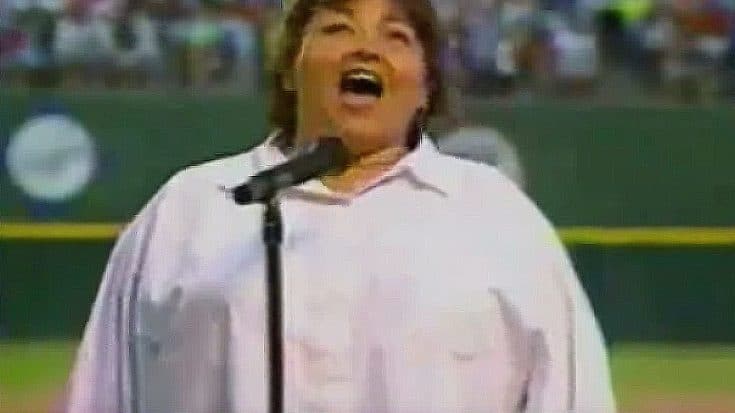 Fergie isn’t having the greatest week. Her bizarre, sexy (words I never again want to place next to the words ‘National Anthem’) take on the National Anthem at Sunday night’s NBA All-Star Game blew up social media, prompting an apology from the 42-year-old singer after it was slammed as “the worst National Anthem performance ever”. Sure, it was bad – really,  really bad, actually – but let’s cut the lady some slack; after all, have we all forgotten about another National Anthem fail from a certain beloved TV mom?

That’s right, y’all – we’re talking about famed comedian Roseanne Barr’s 1990 performance of the National Anthem. Barr, 65, famously botched her performance at a San Diego Padres game in 1990, her screeching, off-key performance earning boos and name calling from the crowd before she spit on the pitcher’s mound, grabbed her crotch and walked off the field smiling. Offensive? Wildly disrespectful? Sure – but unlike Fergie, the performance Roseanne gave wasn’t the one she had planned.

In 2015, Barr explained how her performance went so very, very wrong:

“I was singing in my act at the time ― and I am a good singer ― I was flattered and fully intended to sing a good version of the song,” she starts. “I started too high. I knew about six notes in that I couldn’t hit the big note. So I just tried to get through it, but I couldn’t hear anything with 50,000 drunk a——- booing, screaming ‘you fat f—,’ giving me the finger and throwing bottles at me during the song they ‘respect’ so much.”

Understandably, Barr’s performance drew sharp rebuke from President George H.W. Bush, who called it “disgraceful,” but for Roseanne, the moment left her “really distraught” and  led her to fear for the safety of her life and that of her 12-year-old son Jake, who was in the audience and had to be retrieved by the police.

Does she regret any of it though? Nope – not in the slightest. “Actually, no, I don’t regret any of it,” Barr says simply, even though her performance cost her infinitely more than she’d planned to lose. She still loves to sing (and is actually pretty good) and has actually performed the National Anthem in the years since, error free. She saw Fergie’s performance Sunday night and found a chance to laugh at herself:

Who saw Fergie's national anthem performance at the NBA All Star Game? I think mine was better lowkey