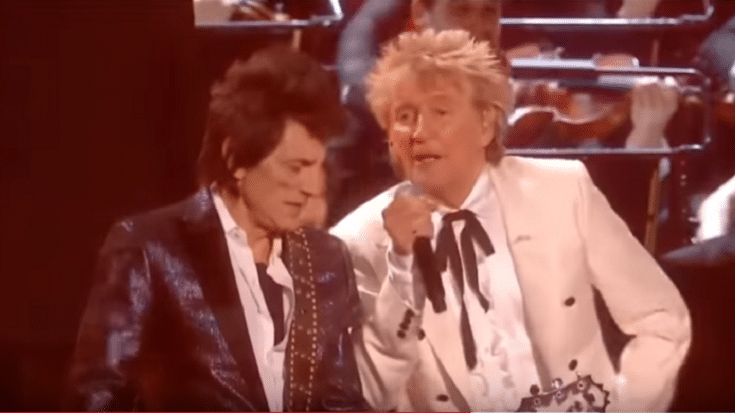 Rod Stewart, Ronnie Wood and Kenney Jones reunited during the finale of the 2020 Brit Awards in London on February 18. They performed their 1971 classic “Stay with Me” following Stewart’s fiery “I Don’t Want to Talk About It” number complete with an orchestral backup.

Before calling the other Faces surviving members, Stewart told the audience: “This show may be 40 years old, but the Faces are now 50 years old. There used to be five of us, there’s only three of us now, so let me bring out Ronnie Wood and Kenney Jones.”

Faces formed in 1969 from the ashes of The Jeff Beck Group and Small Faces. The original lineup include Rod Stewart (vocals), Ron Wood (guitar), Ian McLagan (keyboards), Ronnie Lane (bass guitar, vocals), and Kenney Jones (drums and percussion). From 1970 to 1975, they regularly toured around Europe, Britain, and the United States. They eventually became one of the top-grossing live acts.

They released four studio albums before disbanding in 1975. In a 2013 interview with The Telegraph, Stewart shared: “I want to sing with my old mates again. In fact, I’d like to see a reunion of the Jeff Beck Group and the Faces. What a bill. That’s a genius idea.”

Check out the video of the performance below.