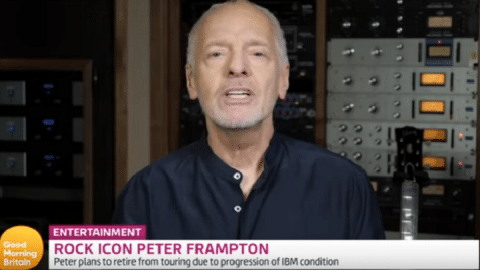 Peter Frampton will detail his life and career in a memoir, “Do You Feel Like I Do?”, for release on October 20. In a statement via Rolling Stone, Frampton said: “This is my journey. All I ever wanted to do was play guitar and it’s taken me many different places – physically and mentally. I’ve been to the moon and back without a rocket, but also to the depths of despair. You never stop paying your dues. Failure has been my greatest inspiration. I brush myself off and then I want to ‘do it again.’ Do You Feel Like I Do?”

In collaboration with with former Rolling Stone editor Alan Light, it will document his work with fellow rocker and childhood friend David Bowie, his substance abuse problems, the “blessing and curse” of the album that propelled him to the top “Frampton Comes Alive!”, and the rare degenerative disease that he’s suffering from.

The memoir will also include the story of his favorite guitar which he lost in 1980 in a plane crash but “mysteriously showed up again – saved from the wreckage” in 2011.

On February 2019, Frampton announced a farewell tour prompted by his Inclusion-Body Myositis diagnosis. He’s set to resume the trek on May 25 at the Usher Hall in Edinburgh. It will wrap up on June 18 at the Sant Jordi Club in Barcelona, Spain.