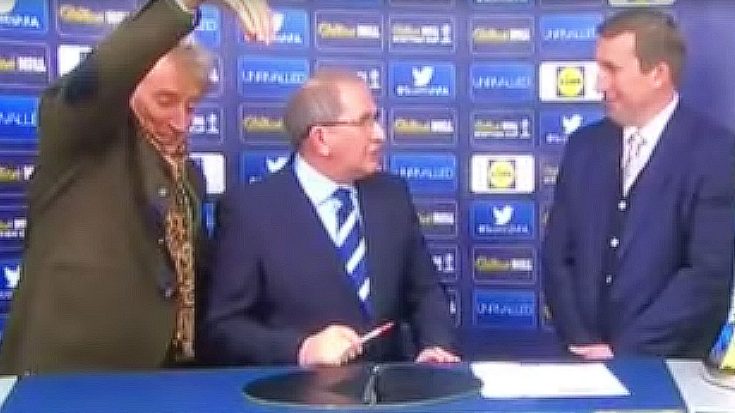 Say what you want about Rod Stewart – err, Sir Rod Stewart – but never let it be said that this man doesn’t have a great sense of humor. This weekend saw the Grammy Award winner make a special appearance on the Scottish Cup Draw, taking part in the time honored tradition of setting up the match-ups for the fifth round of the football tournament. Rocking a leopard print scarf and green jacket, Rod is absolutely in rare form as he plucks numbered balls from a bin in front of him, reading them off to the audience at home before ducking down to hide them away and out of sight.

The fun doesn’t stop there, though; the program’s hosts can be seen speaking to each other while Rod stands off to the side and makes exaggerated diving motions before it’s even time to draw the ball from the bin, giggling like a little kid instead of a 72-year-old rock legend who just last year was knighted by the Duke of Cambridge. We don’t mind – if there’s one thing we love more than watching Rod rock a stage, it’s watching him relaxed and genuinely having a good time!