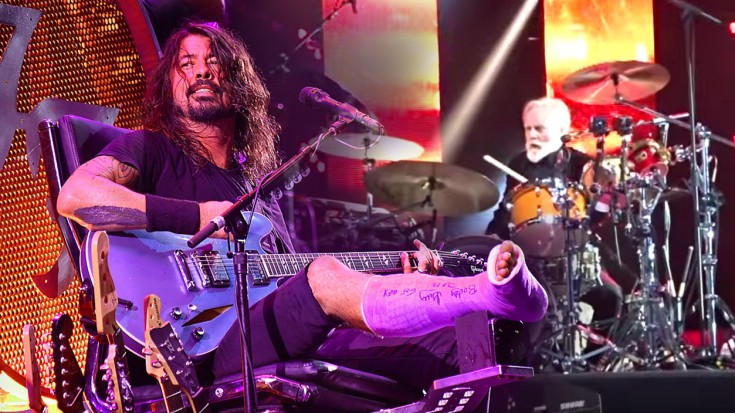 Dave Grohl Calls It A “SuperduperGroup”

When Dave Grohl of the Foo Fighters broke his leg earlier this year, the band had to cancel a series of UK tour dates but promised to make it up to the fans – and make it up to the fans, they did! To coincide with what would have been Freddie Mercury’s 69th birthday, the Foos made amends with the Milton Keynes Bowl crowd by bringing onstage two members of rock’s royal family, Led Zeppelin’s John Paul Jones and Queen’s Roger Taylor for a rowdy cover of ‘Under Pressure’ that was absolutely unbelievable!

Fun Fact:  This isn’t the first time John Paul Jones has worked with Dave Grohl; the two used to be part of Them Crooked Vultures, a supergroup featuring  Joshua Homme and Alain Johannes.

You know you’ve made it when members of Queen and Led Zeppelin even pick up the phone when you call, much less perform one of the most iconic songs ever written with you! Flanked by Roger Taylor filling in on drums for Foo Fighters drummer Taylor Hawkins and John Paul Jones on keyboard duty, this once in a lifetime “superdupergroup” was absolutely unstoppable that night. It doesn’t matter which band you’re more of a fan of – this is the ultimate rock and roll fantasy come true!