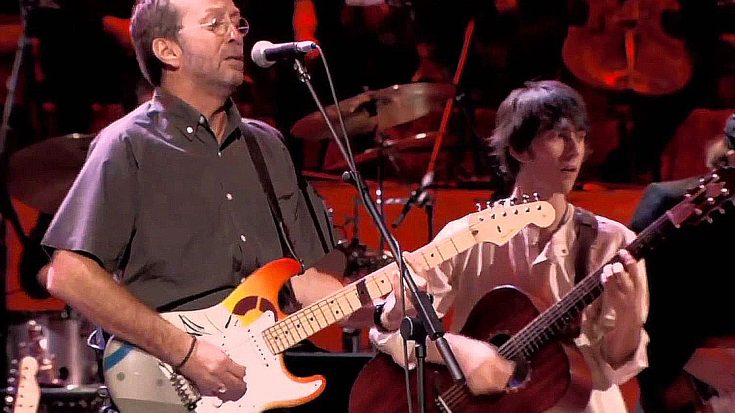 George Harrison’s November 29, 2001 death at the age of 58 following a lengthy battle with throat cancer left a void not just in the hearts of his friends and family, but within the music world. Suddenly, our lovely ‘quiet’ Beatle was no more, leaving the music industry he’d both loved and hated his entire life scrambling to figure out how to properly pay tribute to a legend of his caliber. The answer came one year later in the form of the Concert For George – a star studded musical affair that saw friends and family take the stage in tribute to George, dishing out heartfelt renditions of some of his most iconic work under the watchful eye of George’s beloved wife Olivia and their son Dhani, who could be seen onstage playing with the other musicians and looking, as his mother put it, “like George had stayed young while the rest of us got old”.

Fun Fact: The profits from the event went to the Material World Charitable Foundation, an organisation set up by Harrison.

Near the end of the show, George’s old friend and love rival Eric Clapton stepped up and took the lead on a stunning “While My Guitar Gently Weeps” jam that featured the likes of ELO’s Jeff Lynne, The Beatles’ Paul McCartney and Ringo Starr, and George’s own son Dhani, no doubt a tribute in itself to all of the times Eric shared a stage with George for “While My Guitar Gently Weeps”. When a legend like George Harrison dies, it’s a tremendous struggle to figure out how to best pay tribute to them in a way that both sums up their accomplishments and includes everyone they’ve ever loved – but in this case, it’s pretty safe to say that this all-star jam was the perfect way to sum up a career well experienced, a life well lived, and a man well loved.