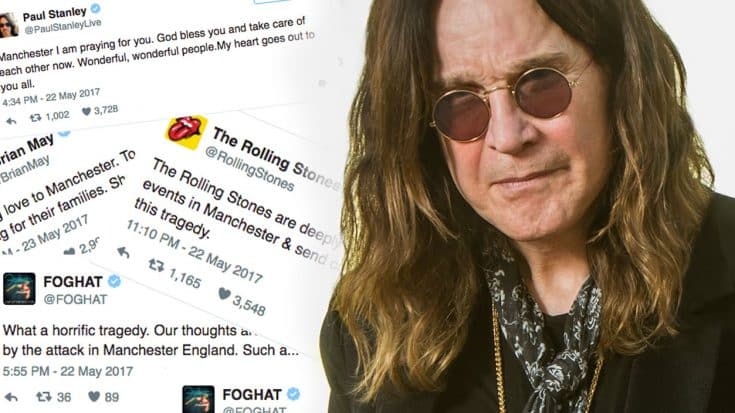 From Ozzy To Uncle Ted, The Rock World Grieves

It’s been a little over 24 hours since a suicide bomber targeted an Ariana Grande concert in Manchester, England, and as the horrors of last night began to sink in around the world – 22 dead and countless others injured, the youngest victim an 8-year-old girl named Saffie – the rock and roll community was among the first to reach out to those affected by the tragedy, heartbroken and outraged by the attack on our most vulnerable: children.

From Black Sabbath to Ted Nugent, here’s a look at some of the rock legends that took to social media in the moments and hours after the news broke:

Manchester I am praying for you. God bless you and take care of each other now. Wonderful, wonderful people.My heart goes out to you all.

Our hearts go out to #Manchester, the news is absolutely devastating.

Queen send out their heartfelt condolences to all of those affected by the shocking events in Manchester late last night.

Sending love to Manchester. To all our friends there and all who are grieving for their families. Shocked and sad. Bri

What a horrific tragedy. Our thoughts are with all of those affected by the attack in Manchester England. Such a… https://t.co/LSTWEtKTUL

Our thoughts are with the victims and their families in Manchester https://t.co/PmzWyKPp27 pic.twitter.com/X2P2a2bCQc

The Rolling Stones are deeply shocked to hear of the appalling events in Manchester & send condolences to everyone affected by this tragedy.

Our hearts go out to England tonight…
Sending love to all those affected by tonight’s tragedy.