If You Haven’t Heard Stevie Nicks And Harry Styles Sing “Leather And Lace,” You’re Missin’ Out 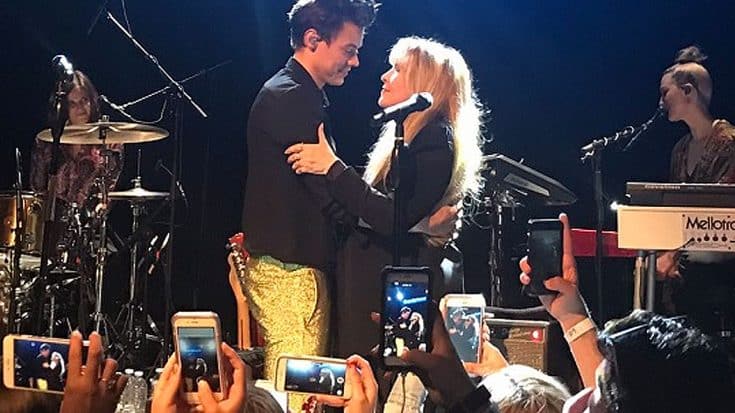 It’s a duet that most classic rock fans would never have anticipated in a million years and for whatever reason, it worked – and it worked well. Last weekend saw 23-year-old pop star Harry Styles hit the stage with special guest Stevie Nicks of Fleetwood Mac for a surprise performance at L.A.’s Troubadour, dazzling the audience with a duet of Nicks’ own “Landslide” and Styles’ “Two Ghosts” from his recently released debut solo album, but the real treat came when these two teamed up for a very special take on “Leather and Lace.”

Fun Fact: Nicks wrote “Leather and Lace” for Waylon Jennings and Jessi Colter’s duet album Leather and Lace, but the song was not included on that album.

Originally recorded by Nicks with ex-flame, Eagles’ Don Henley in 1980 for Nicks’ debut solo album Bella Donna, “Leather and Lace” was introduced to a brand new generation Saturday night – a generation that might know a love song or two, but none like the magic that sprang from the mind and heart of Stevie Nicks at the height of some of her most iconic romances.

If 23-year-old Styles looks a little shellshocked at some points in the performance, don’t worry – your eyes aren’t deceiving you in the slightest! Styles, formerly of hit boy band One Direction, has long cited Nicks and her songwriting as a major inspiration; no doubt the opportunity to share the stage and one of her most iconic songs to date proved to be a little overwhelming for the 23-year-old.

Check out Stevie and Harry in the video below and as always, enjoy!