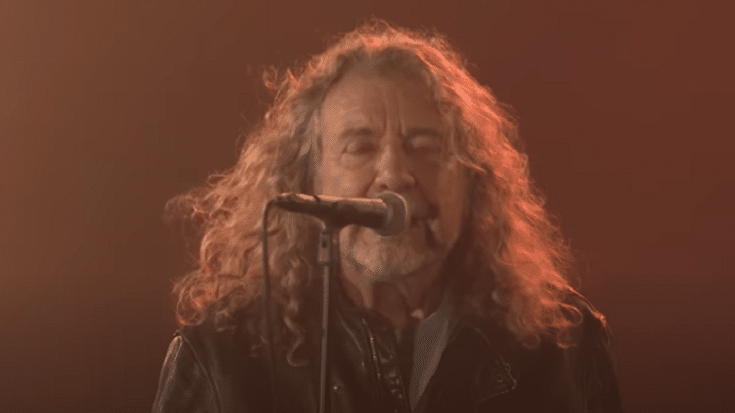 He Also Described Bonzo As Having “Such Great Feel”

In a new interview with Rolling Stone, Led Zeppelin frontman Robert Plant recalled the time he said “I am a golden god!” during the birthday party of drummer John Bonham. The moment was captured in an iconic photo of him on a balcony at the Continental Hyatt House Hotel in L.A. with his arms outstretched and smiling like he’s got the entire world at his feet.

He explained, “Whatever was said from minute to minute was just sheer comic entertainment most of the time in those early Led Zeppelin days. And I think it was in the middle of some ridiculous moment, maybe even Bonzo’s birthday party somewhere up in Beverly Hills, where somebody had made John a three-tier birthday cake. We were at some event and John was showing it round the room, and he showed it to somebody, I think it was George Harrison who karate-chopped the cake.”

He continued, “Bonzo decided that there was something that needed to be done about that, and there was all sorts of scuttling, and it was just another one of those boyish prank-type of events going on. And it just seemed that the only thing that was missing was somebody to actually round the whole thing up with even more nonsense. So I just opened my arms and just proclaimed that. And then I think a piece of cake sadly lodged somewhere on the end of my nose or something.”

Speaking of Bonzo, it’s been forty years since his death and it marked the end of Led Zeppelin too as they disbanded not long after.

Plant said, “There’s quite a lot of people who have been close to me who are no longer with us, but he’s omnipresent in my time because we went into this venture together. We’d been on two or three different trajectories prior to Zeppelin together, which had always been chaotic and always ended in tears one way or another. But with Zeppelin, we always came back, shared a vehicle, came back from the airport, made our way back to where we live on more or less the Welsh borders, so we were still tight, to a large degree, right up until the end. We were definitely from the same bag, the same nest.”

Bonzo was a cut above the rest, someone every other drummer looked up to and to Plant, he was just in awe of Bonzo’s immense talent. He has nothing but praises for the legendary sticksman, “Such great feel. I mean his feel was everything. We went to the Burning Spear one night in the South Side of Chicago to see Bobby “Blue” Bland and his orchestra play in this quaint black club, and we got in there, and John got up and played “Further on Up the Road” and “Turn on Your Love Light” and stuff like that, and it was insane. And all the musicians were just leaning towards him, because he’d got such feel. He was just as at home playing with Bobby “Blue” Bland as he was playing “Fool in the Rain” all those years later. It was something else.”