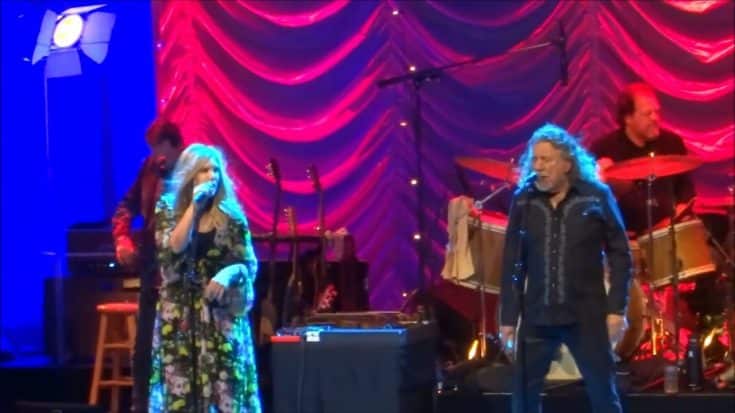 The original “Rock and Roll” first appeared on the 1971 Led Zeppelin IV album and was released as a single early in the following year. It peaked at No. 47 on the Billboard Hot 100 and has been chosen as one of the Rock and Roll Hall of Fame’s 500 Songs That Shaped Rock and Roll.

Plant and Krauss’ version may not have John Bonham’s opening drums and Jimmy Page’s guitar licks, but it fits well with the style they are going for. With their current band, which includes a fiddle player, guitarists, a stand-up bassist and a steady shuffling drum beat, the song now serves as more of a duet and feels more rooted in the ’50s style of early rock and roll.

In addition to their own material and the “Rock and Roll” cover, the pair also included on their set list Zeppelin’s “The Battle of Evermore,” “When the Levee Breaks” and the Page/Plant collaboration “Please Read This Letter.” They also covered The Everly Brothers’ “Gone Gone Gone” and “Stick With Me Baby.”

Plant and Krauss are currently on the road with support from JD McPherson. You can watch their recent performance below.