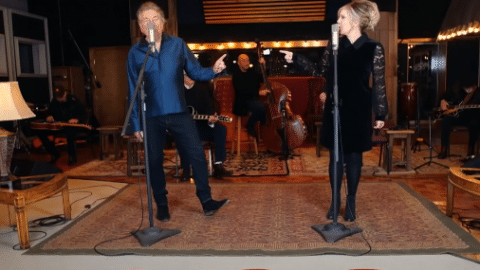 Back in August, Robert Plant and Alison Krauss dropped the official audio of “Can’t Let Go”. Originally recorded by Lucinda Williams, the pair covered the song and released it as the first single to their album “Raise the Roof.” They recently released the LP last November 19, and perhaps unsurprisingly, it’s glorious and unforgettable.

Plant and Krauss are currently promoting their latest project, and they performed “Can’t Let Go” on The Late Night Show with Stephen Colbert and The One Show. They’re also embarking on a tour in support of “Raise the Roof.”

It took them 14 years to follow-up their highly successful “Raising Sand.”

“You tend to get preoccupied with the forces of the moment,” Plant told Vanity Fair. “I keep landing in all sorts of different places, and I never think about continuity on any level—although I like adventures. As you might remember, my head is quite easily turned, and if I get an offer to do something a little left of center, I’m gone.”

“We never really stopped talking about it,” Krauss added. “I used to hear Lucinda Williams [who sings backing vocals on the album] sing “Can’t Let Go” for years, and I thought it would be so much fun to do it with Robert.”