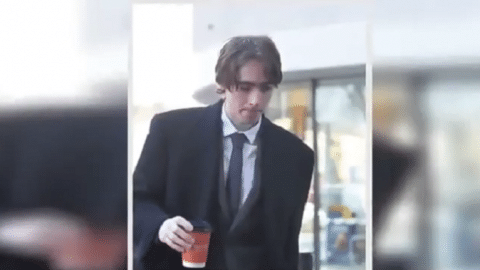 Oasis frontman Liam Gallagher and All Saints singer Nicole Appleton’s son Gene and Ringo Starr’s grandson Sonny Starkey are apparently buddies and they’ve gotten in trouble together. And so on Friday, they both appeared in court to face criminal charges.

The pair, both 18 years old, made headlines after an alleged late-night altercation with a staff at Tesco Express on Heath Street, Hampstead.

Along with 19-year old IMG model Noah Ponte, they pleaded not guilty to affray and using or threatening unlawful violence towards another. According to Daily Mail UK, “Gene and Starkey were described as ‘windmilling’ down the aisle at a shopkeeper trying to stop them leaving” and there’s a CCTV footage of them as evidence.

Since Ponte wasn’t allowed to buy beer at midnight (Tesco doesn’t sell any alcohol after 11PM), he told the worker, “You bloody Indians. Go back to where you came from. You’re not wanted here.” Thus, he was also charged with racially aggravated common assault. Ponte even tried to leave Tesco Express without paying.

Liam Gallagher didn’t attend the hearing while drummer and road manager father Jason was there to support Starkey.

The trio’s next court appearance will be on March 9.