Ringo And Paul Are In The Studio, And We’re Dying To Know What These Beatles Are Cookin’ Up 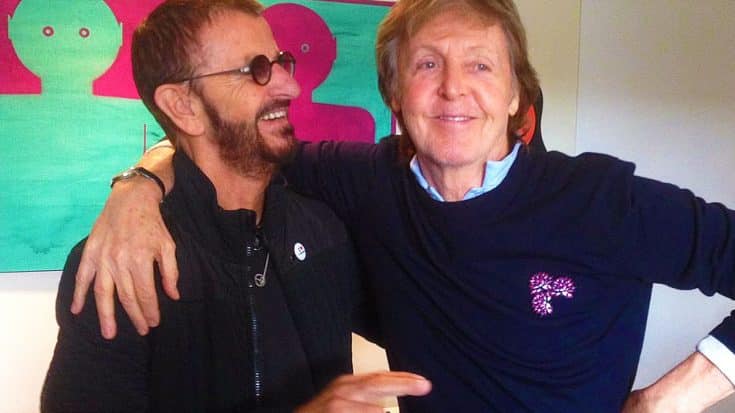 2017 is off and running and at nearly three months in it already looks like we’re in for a great year for rock and roll music – and not a moment too soon! Last weekend saw former Beatles Paul McCartney and Ringo Starr reunite in the studio for the first time since Starr’s 2010 album Y Not, which saw the Fab Four’s acclaimed rhythm section join forces for “Peace Dream” and “Walk With You”; as if that weren’t cool enough on its own, the pair was joined by Ringo’s own co-brother-in-law and fellow rock legend Joe Walsh, who stopped by to assist with some of his stellar guitar work that we have no trouble believing will round out the magic created by Paul and Ringo.

Ringo, one of our favorite people to follow on social media, took to Twitter to share a few photos from what looks like a productive day in the studio with two of his oldest friends:

Thanks for coming over man and playing Great bass. I love you man peace and love. ?✌️???☮ pic.twitter.com/Z5kpyLLlkO

Ringo’s publicist confirmed that Paul was there for his contribution to former bandmate’s upcoming album.

Still yet unnamed, those aren’t the only fun surprises Starr’s yet to be named 19th studio album has in store for fans; Walsh’s fellow Eagle Timothy B. Schmit is slated for a guest appearance along with Richard Page of Mr Mister, Benmont Tench of the Heartbreakers, Nathan East and Amy Keys. No word yet as to what Sir Paul’s contribution to the album is but we’ve got a pretty good feeling that whatever it is, it’s going to be amazing. Stay tuned to Society of Rock for more updates as they become available, this is a story you’ll definitely want to keep an eye on!