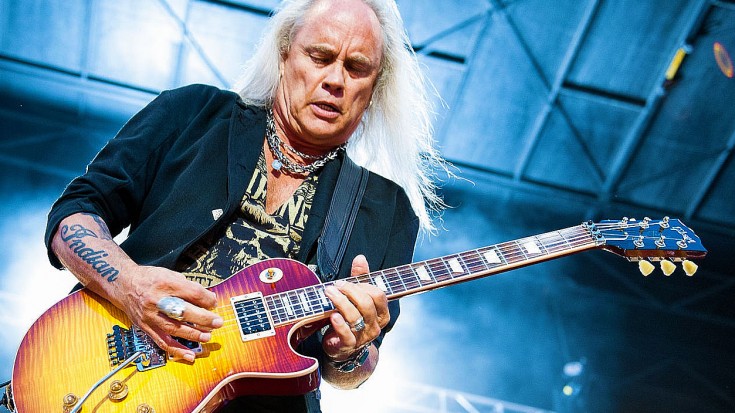 “I’d Love To Shake His Hand And Tell Him I’m Grateful.”

When it comes to musical influences, Lynyrd Skynyrd’s Rickey Medlocke has been inspired by some of the greatest axeslingers to walk the earth: he calls Jimi Hendrix the greatest guitar player he’s heard in his life, hails former Yardbird Jeff Beck as “an extraordinary musician,” and of his friendship with ZZ Top axeman Billy Gibbons says, “I’m honored to be very good friends with Billy Gibbons. He’s the salt of the Earth.” In fact, whenever Rickey’s looking for a new sound or something to inspire him while writing for Lynyrd Skynyrd, he digs out their music and before long he’s hit with the stroke of genius that you hear on some of your favorite Lynyrd Skynyrd tunes.

While he’s rubbed elbows with some pretty legendary musicians over the course of his career, there’s still one legend Rickey would like to shake hands with after all these years: Eric Clapton.

“I’ve never met Eric Clapton, although I’d love to shake his hand and tell him I’m grateful,” reveals Rickey, who went on to credit the Cream guitarist with a crucial part of his guitar playing style: “I developed my vibrato thanks to him.”

While Rickey’s no doubt spent his life creating a sound uniquely his own, distinguishable from past Skynyrd guitarists and even from bandmates Gary Rossington and Sparky Matejka, there’s no mistaking the bluesy, Clapton-inspired sound that colors his guitar playing.

It takes a truly great musician to be able to not only speak of his influences with the same excitement he had when he first came across them, but to be able to constantly find new ways to be inspired and learn from them – and Rickey Medlocke succeeds in spades!