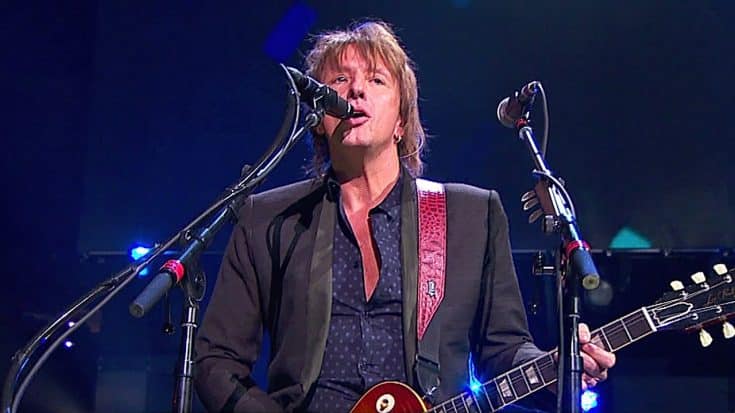 Richie Sambora was Bon Jovi‘s lead guitarist for three decades until he decided to leave in 2013. However, he recently shared that he’s “talking a bit” with his former bandmates, hinting at the possibility of a reunion at some time.

There are no hard feelings between Sambora and the remaining members of Bon Jovi. His last performance with them took place in 2018 as they performed “Livin’ on a Prayer” when they were inducted into the Rock and Roll Hall of Fame.

Two years later, the guitarist ensured that he would be open to playing with them again under certain circumstances. He told the Daily Mail:

“It would have to be a special situation for me to go back, but I’m certainly not counting it out. I have no malice toward that band.”

Well, that “special situation” just may be lurking around the corner. Earlier this week at the Music Industry Trust Awards in London, the guitarist was asked by the U.K.’s Metro if he may reunite with Bon Jovi next year at Glastonbury Festival, though the lineup hasn’t been announced yet. Sambora teased:

Sambora’s leaving the band had to do with his family, he explained to People in 2013:

“It wasn’t a popular decision by any means, obviously, but there was really almost no choice about it. I had a lot of conscious work to do around [my personal life].

“We’ve been through a lot of things together. That was a time of psychological maintenance for the family… You know, I ain’t no angel. But I realized, [my daughter] Ava needed me to be around at that point in time. Family had to come first, and that’s what happened.”

The last Bon Jovi record Sambora played on was 2013’s What About Now. The band has released another three albums, the most recent being in 2020.