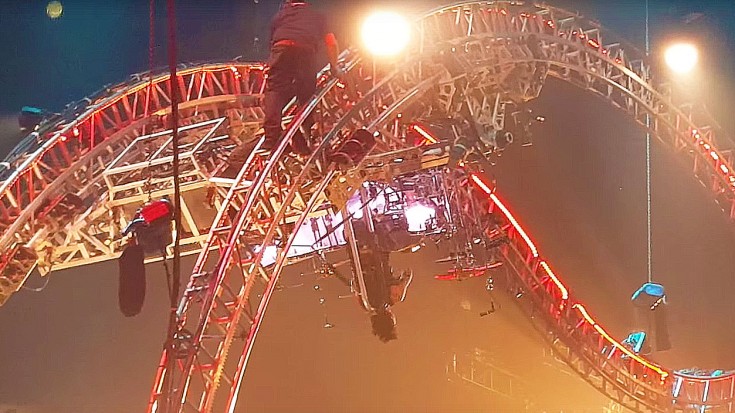 Mötley Crüe Go Out With A Bang

Flame-throwing guitars, go-go dancers, a rollercoaster – when Mötley Crüe promised that the final show of their last ever tour would be a night to remember, they weren’t kidding! The now retired LA rockers kicked off their final show on December 31, 2015 at Los Angeles’ Staples Center and despite the few tears shed and the drama that unfolded backstage that night, Mötley Crüe went out with a bang; but in true Crüe fashion, the night wasn’t without its moment of hilarity when drummer Tommy Lee found himself in the middle of a failed drum stunt at the worst possible time when his 50-foot high Cruecifly rollercoaster actually got stuck in mid-air during a drum solo, leaving the drummer hanging upside down for several minutes.

While he laughed about it with the crowd, Tommy was just as panicked as anyone would be in his situation:

“I was up there a long time — a little over a minute — and that’s not cool when you’re playing upside-down and all the blood is rushing to your head,” Lee recalls.

“The thing is, nobody knew anything was wrong but I felt like I was going to pass out and my head was going to explode.”

Masking his panic with a few laughs, Tommy kept playing until two crew members were able to scale the Cruecifly and get him out of there before anything had the chance to go seriously wrong. Lucky for us, the entire exchange was caught on camera by Mötley Crüe fan Stuart Thompson, whose footage has amassed nearly 700,000 views on YouTube since New Year’s Eve. Check it out in the footage below!