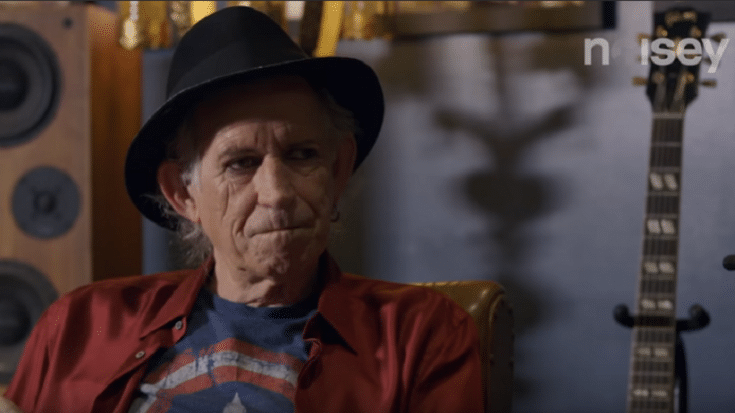 While mostly popular for being the Rolling Stones’ guitarist, his drug-related arrests and other (mis)adventures are well-documented too. With a career spanning almost six decades, we can safely assume he’s seen it all and been through it all. He may have once lived life in the fast lane but looking beyond his wild escapades, Richards is more than just another rocker – he co-founded the Rolling Stones, wrote some of the most memorable riffs in rock, and penned several of the band’s classic hits.

To celebrate this rock royalty, here are five stories from his music career.

5. Before they were selling out stadiums, Richards, Mick Jagger, and Brian Jones were still struggling musicians who shared a flat. And they rigged their bathroom because the flushing of the toilet sounded like an applause when recorded on tape.

4. At the Chicago stop in their 1972 tour, Hugh Hefner invited Richards and saxophonist Bobby Keys to stay at the playboy mansion. They almost set the whole place on fire. Richard said in Life, “Bobby says, ‘It’s smoky in here.’ And then a little later there’s a thumping at the door, waiters and guys in black suits bringing buckets of water. They get the door open, and we’re sitting on the floor, our eyeballs very pinned.”

3. The Rolling Stones’ 1968 song “Jumpin’ Jack Flash” which they’ve played for over a thousand times in concert was based on actual person – Richards’ gardener at Redlands named Jack Dyer. Richards told Rolling Stone, “Mick and I had been up all night, it was raining outside, and there was the sound of these boots near the window, belonging to my gardener, Jack Dyer. It woke Mick up. He said, ‘What’s that?’ I said, ‘Oh, that’s Jack. That’s jumping Jack.’ I started to work around the phrase on the guitar, which was in open tuning, singing the phrase ‘Jumping Jack.’ Mick said, ‘Flash,’ and suddenly we had this phrase with a great rhythm and ring to it.”

2. Richards recorded the 1968 song “Before They Make Me Run” in five days straight sans sleep. Aside from the lead vocals, he also took over the acoustic and electric guitars and bass duties. However, that’s not the longest he went on without so much as a wink. His record stands at nine days. He explained, “I fell asleep standing up, eventually … I was just putting another cassette back on the shelf, and I was feeling great, and I turned ’round and fell asleep. I fell against the edge of the speaker. Woke up in a pool of blood, wondering, ‘Is that claret?'”

1. For the Toronto stop of their 1989 Steel Wheels tour, the caterer went the extra mile by setting up an English pub. Richards was looking forward to eating shepherd’s pie but since he arrived late, he found out that someone already helped himself with a serving. So, he refused to go on stage until he was given another one. This of course made Jagger furious but at the end of the day, they gave Richards what he wanted. He revealed, “It’s now famous, my rule on the road. Nobody touches the shepherd’s pie till I’ve been in there. Don’t bust my crust, baby.”