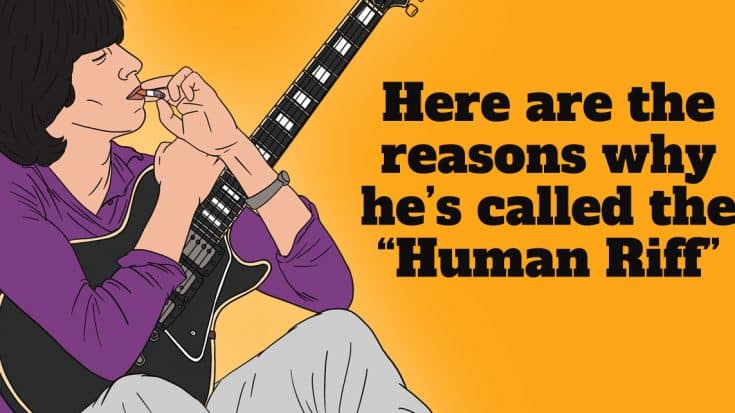 Keith Richards himself summed it up in his autobiography Life when he wrote, “I’m the riff master. The only one I missed and that Mick Jagger got was ‘Brown Sugar,’ and I’ll tip my hat there. There he got me. I mean, I did tidy it up a bit, but that was his, words and music.” He further adds that “these crucial, wonderful riffs that just came, I don’t know where from”. Whether he’s just being modest or plain honest, the fact remains that he came up with some of the most addicting and memorable riffs in history.

10. Can’t You Hear Me Knocking

Richards told Guitar World, “On that song, my fingers just landed in the right place and I discovered a few things about that [five-string, open G] tuning that I’d never been aware of. I think I realized that even as I was cutting the track.” He also shared in ‘Life’, “‘Can’t You Hear Me Knocking’ came out flying – I just found the tuning and the riff and started to swing it and Charlie picked up on it just like that, and we’re thinking, hey, this is some groove. So it was smiles all around. For a guitar player it’s no big deal to play, the chopping, staccato bursts of chords, very direct and spare.”

Engineer Andy Johns recalled that it was Richards who “transformed the song into what it was meant to be.” The legendary Stones guitarist also told Rolling Stone, “It comes off pretty smooth, but it’s quite tricky. There’s an interesting bridge you have to watch out for. Otherwise, it’s straightforward rock and soul that we love. It’s Charlie Watts’ meat and potatoes.”

8. All Down The Line

Mick Taylor shined on this track but it’s undoubtedly Keef’s guitar riffs that took the entire song to the next level.

Pure rock ‘n roll. Richards called it “the culmination of everything we were good at at the time” and explained that “It started out a real country honk put on, a hokey thing. And then couple of months later we were writing songs and recording. And somehow by some metamorphosis it suddenly went into this little swampy, black thing, a Blues thing. Really, I can’t give you a credible reason of how it turned around from that to that. Except there’s not really a lot of difference between white country music and black country music. It’s just a matter of nuance and style. I think it has to do with the fact that we were playing a lot around with open tunings at the time. So we were trying songs out just to see if they could be played in open tuning. And that one just sunk in.”

Richards doesn’t mind if someone else steals the spotlight but the fact remains that his riff in this slower number is undoubtedly one of his finest works. He trades licks with Ronnie Wood here and it’s simply magical. Wood said, “Ever since Keith and I first started to trade licks, it was a very natural thing that, for some unknown reason, if he’s playing up high, I’m down low and the other way around. We cross over very naturally. We call it an ancient form of weaving– which we still are impressed by it to this day. Unexplainable, wonderful things happen with the guitar weaving. There’s no plan.”

A highlight of Beggars Banquet, Richards revealed to Guitar World: “On Street Fighting Man, there’s one six-string and one five-string acoustic. They’re both in open tunings, but then there’s a lot of capo work. There are lots of layers of guitars on Street Fighting Man, so it’s difficult to say what you’re hearing on there. ’Cause I tried eight different guitars, and which ones were used in the final version I couldn’t say.”

Engineer Andy Johns recalled that “Keith would sit down stairs and at one point he sat there for 12 hours without getting out of his chair just playing the riff over and over and over. And then one night, it was very late, four or five in the morning, Keith says, ‘Let me listen to that take again.’ And he nods off while the tape is playing. I thought, ‘Great. That’s it. End of the night and I’m out of here.’ So I go back to my place where I was staying. (Horn player/arranger) Jim Price and I had this villa. It was pretty spanky. I’m tellin’ you. A half an hour drive. I walk in the front door and the phone is ringing. I pick it up and it’s Keith. ‘Where are you?’ ‘Well, I’m obviously here ’cause I answered the phone.’ ‘Well you better get back here, man, ’cause I have this guitar part. Come back!'”

One of his most iconic riffs, he explained: “I was convinced that was a reggae song. Everybody else was convinced of that. “It’s reggae, man.” We did 45 takes like that. But then on a break I just played that guitar riff, not even really thinking much about it; we did a take rocking away and then went back to work and did another 15 reggae takes. Five years later, Mick discovered that one rock take in the middle of the tape and realized how good it was. The fact that I missed Start Me Up for five years is one of my disappointments. It just went straight over my head. But you can’t catch everything.”

The moment he plays the intro, the crowd ALWAYS, ALWAYS goes wild. Rumor has it that he wrote it in his sleep. He shared, “When I wrote the song, I didn’t think of that particular riff as the big guitar riff. That all fell into place at RCA [recording studio in L.A.] when Gibson dumped on me one of those first Fuzz-Tone pedals. I actually thought of that guitar line as a horn riff. The way Otis Redding ended up doing it is probably closer to my original conception for the song. It’s an obvious horn riff. And when this new Fuzz Tone pedal arrived in the studio from the local dealership or something, I said, “Oh, this is good. It’s got a bit of sustain, so I can use it to sketch out the horn line.”

Mindblowing and kickass. It’s Keith Richards’ crowning achievement. He told Guitar World, “On the record, I played a Gibson Hummingbird [acoustic] tuned to either open E or open D with a capo. And then I added another [acoustic] guitar over the top, but tuned to Nashville tuning [tuned like a 12-string guitar without the lower octave strings].”