RARE Video Of Angus Young Facing Off Against A Fan! 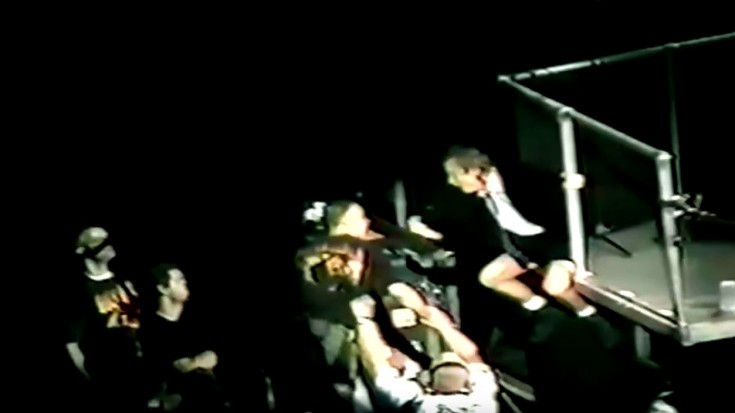 What more is there to say about the Lead Guitarist for AC/DC, Angus Young? He’s the school boy clothes wearing chicken walking guitar master. His unique style has resonated with fan for decades now. It’s hard to imagine anyone holding anything against the Australian guitarist, but apparently, there is one man who does. What he has against him is unsure, but it created and awkwardly awesome moment!

What you’re about to watch is a video that just surfaced of a disgruntled (possibly drunk) throw what appears to be water (could be beer) at a playing Angus Young, but this best part Angus’ reaction.

Rule #158b of the AC/DC Fan Handbook CLEARLY states “Don’t throw liquids at Angus Young While he’s playing, especially when you know he’ll do this!

Angus Young handles the situation with hilarity and class! Angus Young can truly do no wrong. He is a fine gentleman in classic rock. My question is what was the angry fan’s motivation? Was he having a bad day? Did Young upset him in someway? Who knows. The video is short, but awesome! Concert attending 101 – Don’t Heckle A Legendary Guitarist! ESPECIALLY when it’s Angus Young! Or you’ll get THUNDERSTRUCK!!